No other art form transacts with us the way literature can. It’s very accessible yet it demands and invites us to add depth to the world and the ideas it conjures. Devin Montgomery tries to capture the joy of discovery and exploration that we get from reading with his unique invention. He calls it the Midnight Clock. It’s a functional timepiece, but it also has a secret. If you follow the riddle engraved on its body, you’ll find a hidden book compartment. 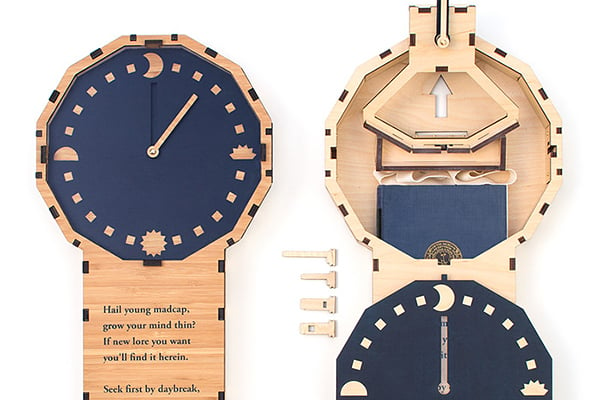 The Midnight Clock is made from either birch of bamboo, with a shatterproof acrylic cover and a quartz movement. To reveal the hidden compartment, you have to remove four pegs along with the acrylic cover in the right order. Naturally, you’ll need to decipher the riddle to find out the right order. It’s not hard to solve, but that’s not really the point of the clock.

Pledge at least $85 (USD) on Kickstarter to get a Midnight Clock as a reward. Naturally once you solve the riddle the Midnight Clock’s magic is drained, but I prefer to think of it as a functional and very creative gift wrap. I think it’s a good way of foreshadowing the wonders that await the recipient in the gift itself.

I do find it somewhat of a missed opportunity though. I think that art is man’s attempt to express that which cannot otherwise be shared using words. Which is why I find the writer a very funny and also valiant class of artist: he uses the very thing that he hopes to transcend. It’s like a vaccine, not because it cures something but because of the audacity of its composition. So wouldn’t it be funny if instead of a clock, you had a book that, when read in a certain way, opens up to reveal another book?