Poppy Turns the iPhone Into a 3D Camera: View-Master 2.0

So far 3D video hasn’t taken off like high definition did, but that hasn’t stopped entrepreneurs from exploring its potential. But while most 3D-capable gadgets tout their cutting edginess, the inventors of Poppy did the opposite. The gadget, which allows you to shoot and view 3D videos and images using an iPhone or iPod Touch, is a throwback through and through. 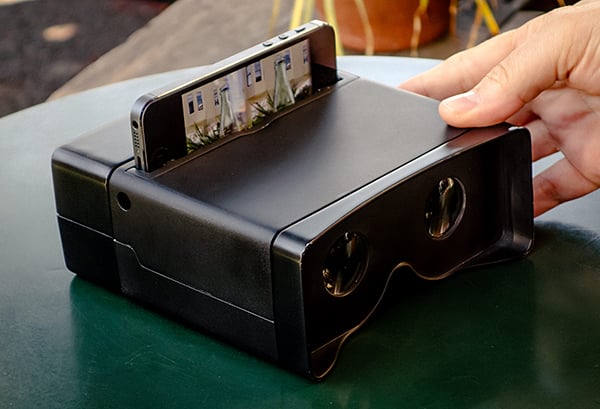 If nothing else, I love how it looks. It’s not shiny, streamlined or made of machined aluminum – it’s a freaking plastic box. Even the way it works is low-tech. The Poppy has no moving or electronic parts. It just uses lenses and mirrors to achieve the 3D effect. The only high tech component of course is your iOS device. The Poppy only works with the iPhone 4, 4S and 5 and the 5th generation iPod Touch.

In the end though, the Poppy is up against the same problem that other 3D gadgets have. It promises a see-it-to-believe-it experience that just can’t be demonstrated or previewed. Still, that hasn’t stopped it from blowing through its Kickstarter goal with almost a month left on its fundraiser. Pledge at least $49 (USD) on Kickstarter to get a Poppy as a reward.