A few months ago we saw an awesome tie with a built-in equalizer. Bill Porter is working on a more interactive necktie: one that plays Tetris. Bill made it to trump his usual geeky teaching attire, a lab coat with lots of LEDs on it. Even in its unfinished state I think we can all agree that the Tetris Tie is much better than the lab coat. 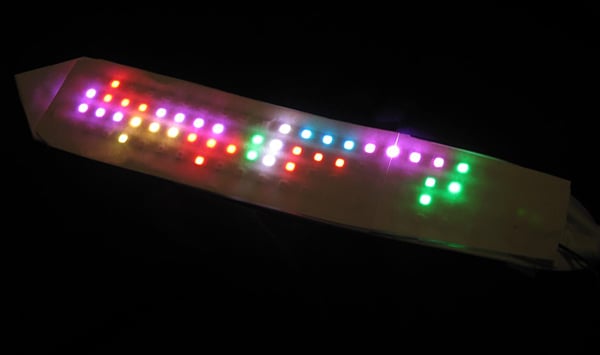 The tie is made of a DigiSpark microcontroller, 80 RGB LEDs and two Li-ion batteries in a custom 3D-printed housing. Bill originally used the batteries for his wedding suit. Don’t be afraid of clicking that link; it’s much better than the lab coat.

All in all Bill only spent four hours and about $50(USD) to make the tie, but as I said, it’s still unfinished. Right now the tie only displays random movements. I’m pretty sure he’s also going to trim the cardboard overlay or perhaps get rid of it altogether. Bill is also planning on adding A.I. that can actually play the game as well as a Bluetooth module so that it can be played using a smartphone as a controller.

[via Bill Porter via inStash]