There are dozens of ways we can modify our voice, but designer Nic Wallenberg made a silly device that bypasses the vocal chords altogether to make unusual sounds come out of one’s mouth. Hence the name Human Speaker. 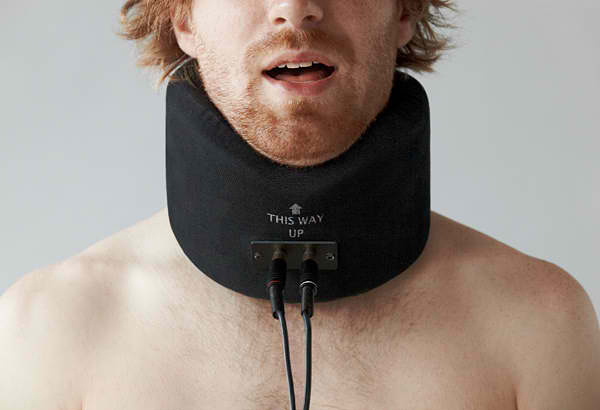 The Human Speaker looks just like a neck collar, except it has sockets for two wires in front. I’m not sure what it’s connected to, but according to Wallenberg the collar sends vibrations to the wearer’s upper throat. All the wearer has to do is open his mouth and a sound will come out. It’s like reverse ventriloquism. The wearer can then play with the sound as one would his own voice, by moving his mouth and lips. The Human Speaker can only make two notes at a time though, so you’ll need several people to make complex music. Or you can do what Wallenberg did:

I bet it’s made from the throats of Daft Punk.

[via Nic Wallenberg via WeWasteTime]