Here, Adam Savage builds one of the best known guns in the universe. Han Solo’s Baster. I mean Blaster. Although, come Thanksgiving, Han is pretty handy with a baster too. He’s an awesome cook, with a fear of getting too close to the freezer. 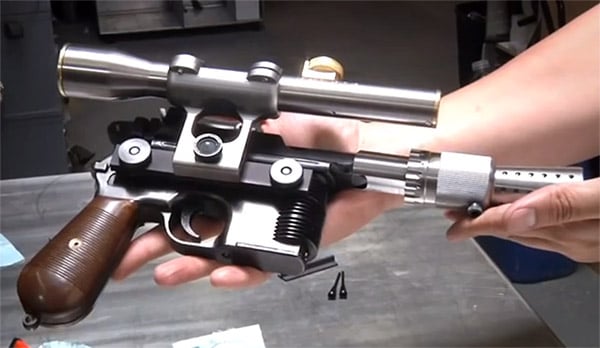 Adam has already made a Blade Runner pistol and an Indiana Jones revolver, so I’m pretty confident he can do it. Hell, is there anything this guy can’t do? Spoiler alert! He fires first and kicks this project’s ass!

This is a serious replica too, with some super nice detail, courtesy of the guys over at The RPF, who did much of the of detective work to figure out the parts needed. Now we just need to figure out how to get it to fire blaster bolts.