The technical magicians at Disney Research are at it once more. This time, they’re working on a technology which allows users to feel sensations without actually having to touch a surface. 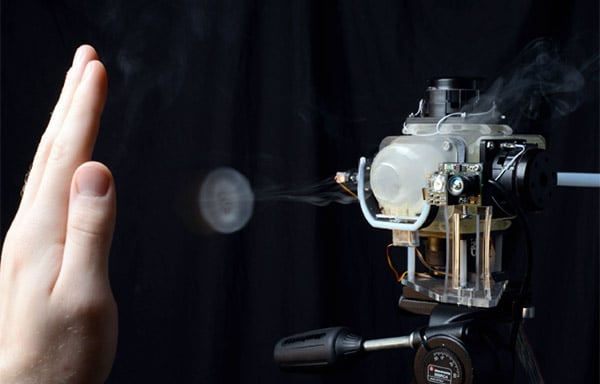 AIREAL is a combination of hardware and software which can create tiny air vortexes in 3D space. It was developed by researchers Rajinder Sodhi, Ivan Poupyrev, Matthew Glisson, and Ali Israr. A set of these small haptic-feedback devices can be used in combination with gesture-based control devices to let users feel sensations and virtual textures while interacting with their computers and video game systems. This is truly some science fiction stuff made real.

Check out some examples of AIREAL in action in the clip below:

Pretty amazing concept, no? Wouldn’t it be cool to combine this with a head-mounted display like the Oculus Rift? The wind could blow in your hair as you run through a virtual world, or you could feel bullets whizzing by when you’re being shot at. Crazy stuff. Or it might just turn up in a next generation of Disney’s Haunted Mansion – where you can actually feel the ghosts surrounding you. Hopefully the Disney Research guys talk to the Imagineers.

You can read the entire research paper on AIREAL here. [PDF]