You are what you wear. Sometimes, you can send the loudest of messages without saying a single word. You can let your clothes do all the talking instead.

For example, take the Twitter Dress developed by creative agency Deportivo. This isn’t the first dress that displays tweets, although it’s the first one that’s political in nature. 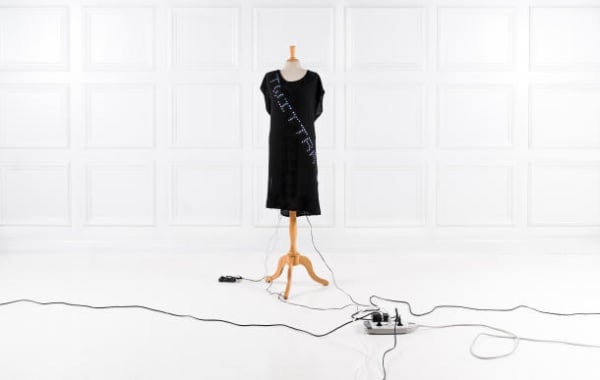 The dress was created to help Sweden’s youth get their voices heard at Almedalen Week, which is an annual political summit where thousands of politicians, celebrities, and PR people will converge to attend seminars, discuss issues, and talk politics. Deportivo worked with youth organization Crossing Borders in the creation of the dress, which you can see in action in the Vine animation below:

Crossing Borders recruited 30 “ambassadors” to wear the dress before the summit began. Their goal was to get the organization’s concerns out there by catching the attention of people who can actually do something about it – in this case, the people in attendance at Almedalen.

After the summit, Deportivo’s Stefan Ronge reported: “The Twitter Dress got a pledge from the minister of equality, Maria Arnholm, on addressing the issue of mandatory education on gender equality for Swedish teachers.”

[via The Daily Dot via C|NET]