These days, even a cheap phone has the ability to record sights and sounds using its camera. But that’s just two of our many senses. With her concept for an “odor camera”, designer Amy Radcliffe hopes that she can encourage electronics makers to make devices that can record scent. 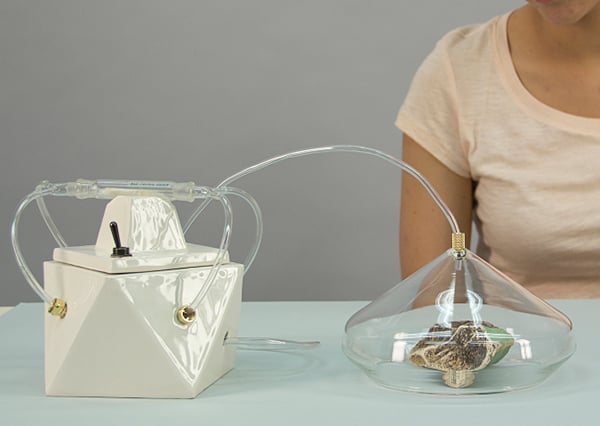 Amy named her scent recorder Madeleine, after the French pastry popularized in Marcel Proust’s novel In Search of Time. In the novel, the pastry – combined with the taste of tea – causes a character to remember something from the past (I wonder if Amy realizes that that scene involves the sense of taste, not the sense of smell). To record a scent with Madeleine, you place its funnel over the object whose scent you want to record. Madeleine’s pump will suck the air surrounding the object and mix it with a resin. Then you send that mixture to a fragrance lab. The lab will replicate the scent and send the replica back to you.

In an interview with The Atlantic, Amy said she deliberately imagined a slow development process for the Madeleine because she wants to bring back the curation that consumers had to enforce back in the days of film photography. Nowadays we can take dozens of pictures in an hour then forget we even have them – or what’s in them – before the day ends. But with film, you had to choose which pictures to develop. In other words, you had to choose which memories to keep. Now imagine if you could keep a thousand scents in your phone. You’d be tweeting recordings of stranger’s farts every 10 seconds. #IRegretNothing.

[via Amy Radcliffe & The Atlantic via The Verge]