Paper Plane Drone: Little Brother’s Got His Eye on You Too

UAVs designed for military use are obviously expensive, but you still wouldn’t want to break even the more affordable recreational variants like the AR.Drone. That’s why Dr. Paul Pounds and his team of roboticists at The University of Queensland are looking into creating disposable drones. One of their prototypes certainly looks the part: it’s shaped like a paper airplane. 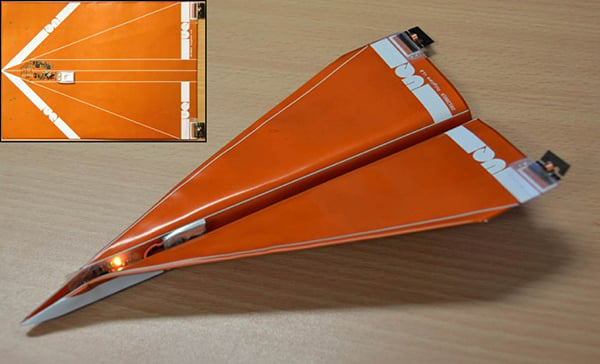 The roboticists’ main reason for researching disposable drones is to help monitor forest fires, that’s why they designed the Polyplane to be cheap, easy to build and operate and also biodegradable. I guess the idea is for firefighters and rescuers to be fine with losing a plane or five so they can focus on looking for people in need.

The Polyplane is made from a cellulose sheet that’s been printed with electronic circuits. It’s then cured and sintered, turning it into a flexible circuit board. Like paper planes, the Polyplane can’t propel itself, but it does have elevons that it can use to steer. Head to Gizmag to see the researcher’s other prototype, a drone shaped like a maple seed.