The Elements iPad app is one of the best alternatives to the traditional periodic table. But a mobile augmented reality company called DAQRI is working on something more interactive and intuitive. The company calls it Elements 4D, a set of building blocks that make learning about the elements fun and easy. 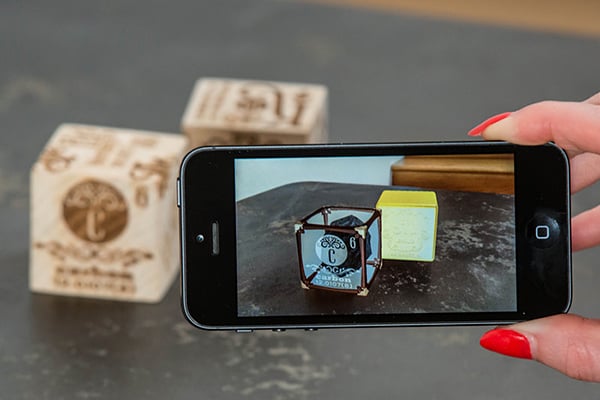 Elements 4D has a total of six wooden blocks. Each block face is dedicated to a single element. When you view a block face or faces through the Elements 4D app – available for both iOS and Android devices – the block comes to life, showing a virtual representation of the element. In the image above you see carbon and gold being represented. The app also shows additional information about each element, but its best feature is demonstrating chemical reactions. Simply by putting two block faces side-by-side, you’ll see what chemical compound they become, if any. It’s a virtual chem lab. You’ll need lots of blocks to make meth.

Pledge at least $25 (USD) on Kickstarter to get Elements 4D blocks as a reward. Note that you have to pledge at least $75 to get all six blocks. Aside from being expensive, another significant downside of Elements 4D is that it currently only has six blocks. That’s just 36 faces, but we know of 118 elements. I guess DAQRI can release more blocks in the future, but then that would add up to hundreds of dollars. I’ll stick to The Elements app for now, but Elements 4D is a great example of the educational application of augmented reality.