Garden Gnomes? Meh. Go for a Lawn Dalek Instead

If you’re a Whovian and need some cool art for your front yard, do what Dulcet’s husband did and build some for yourself. You don’t have to be Davros to build a neat Dalek for your neighbors to admire. 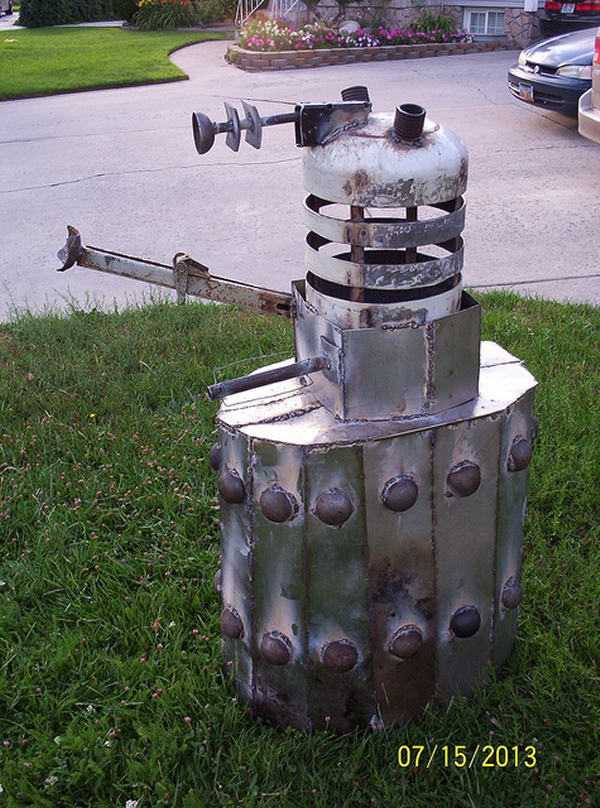 Apparently, he only just learned to weld, and made this Dalek lawn ornament from found pieces of metal, except for the half-spheres. You can’t really find those just anywhere. I’ll let her tell it:

Every time he rides his bike to work, he brings home metal stuff from the side of the road. We’ve been talking about him making something from them for quite a while. A few months ago, he got a crash course on welding from our neighbor who just happens to have a mig welder…The only things he purchased were the half-spheres, which are pipe caps. The eye-stalk in mounted in part of a truck hitch, and swivels up and down. The arm without the laser is made from a jack, and telescopes out. The head is a propane tank sliced up, with pieces of our broken garage-door-opener spring on top. The whole thing is four and a half feet tall.

It looks pretty sweet. I’m surprised the neighborhood kids haven’t made it an altar yet, where they can kneel and wish for the 50th anniversary Doctor Who trailer to show up online.