Digital Carjacking: The Smarter They Are, The Dumber They Are

Modern automobiles benefit from increasingly small and smart computers, which can help control or augment everything from a car’s dashboard display to fundamental functions like steering. But as the world is slowly realizing, if something runs software, that thing can be hacked. That’s what Forbes recently found out thanks to a demonstration by two computer security experts. 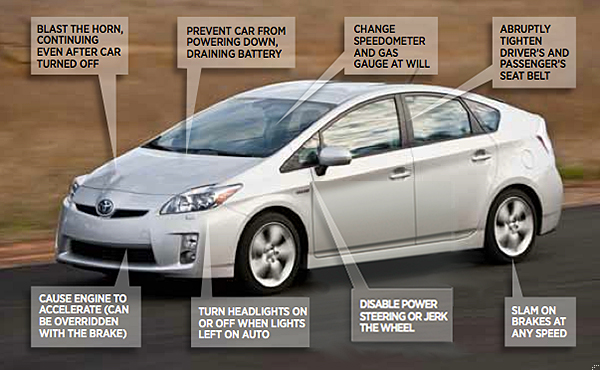 Forbes’ Andy Greenberg met with Charlie Miller – a security engineer at Twitter – and Chris Valasek – the Director of Security Intelligence at security services consulting firm IOActive – to experience firsthand how today’s high-tech cars can be fooled. Charlie and Chris connected to one of the Electronic Control Units or ECUs of a Toyota Prius and proceeded to do all sorts of dangerous tweaks with it on the fly.

Charlie and Chris are working under a grant from DARPA to expose vulnerabilities in cars. Greenberg also drove a Ford Escape that both security experts hacked in similar ways. When Greenberg spoke to a Toyota spokesperson, he was told that the hack in the video above didn’t really concern them because it involved gaining access to the car and physically connecting a device to it. But the reason why Charlie and Chris didn’t bother to do it wirelessly is because that part has already been proven, way back in 2010:

Yeah these things need to be patched now. These videos are extremely troubling.

[via Forbes via BBC]