For months there have been rumors that Apple will release a less expensive version of the iPhone for the masses – especially in parts of the world where the current gen iPhone is considered too expensive. Images have leaked of colorful, possibly plastic-cased iPhone components, and now we have what appears to be a product name – the iPhone 5C. 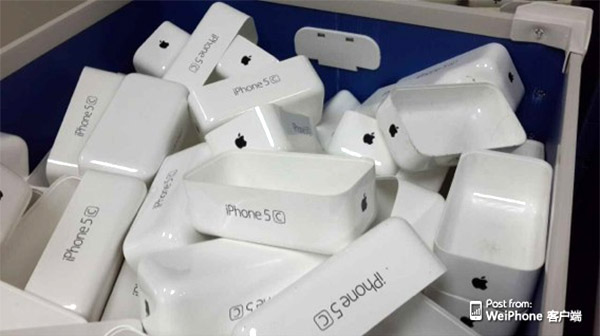 This tub of plastic packaging clearly labeled “iPhone 5C” and adorned with the Apple logo was spotted in China and posted on the WeiPhone forums. While they definitely could be boxes for some cheap knock-off iPhones, I’m going to go out on a limb and say this looks legit, and the plastic construction of the packaging would go well with the rumored less-expensive iPhone. Now what the “C” stands for is anyone’s guess – perhaps it stands for “cheap” but I don’t think so. It’s more likely to stand for “colors,” IMHO.

Regardless of the veracity of this image, I don’t think we’ll be waiting too much longer to see the next iPhones emerge from Apple. All signs point to a September or October reveal of both an inexpensive model and an updated iPhone 5, rumored to be called the iPhone 5S – though I’d really love for a surprise reveal of an iPhone 6.