I’ve had the opportunity to try out a number of head-mounted displays over the years, and most of them have been pretty underwhelming, either from a display quality or comfort perspective. And while many users are waiting to see what the consumer version of the Oculus Rift has to offer, there is already a very capable head-mounted display – with a head-tracking option – on the market today. 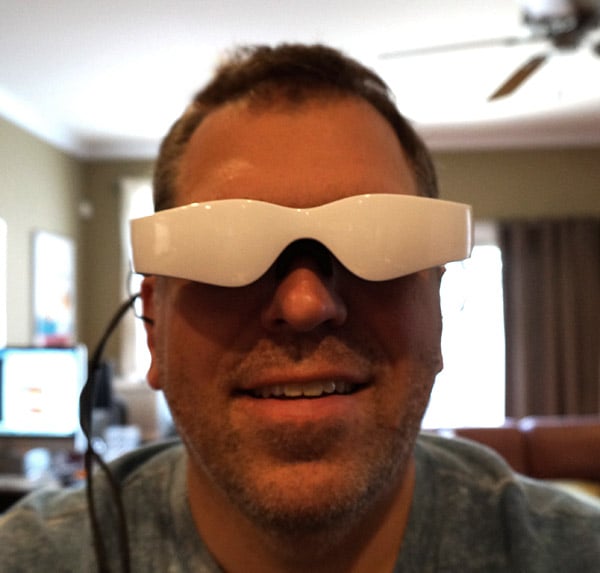 The Zeiss Cinemizer display is by far the most comfortable head-mounted display I’ve ever worn. The glasses weigh only 4.2 ounces, and place less than 3 ounces of weight on the bridge of your nose, which makes them comfortable for long viewing sessions. Inside the Cinemizer’s white goggles, it packs a pair of 870 x 500 resolution OLED displays. These tiny 8mm x 5mm displays provide an insane pixel density of 2500 ppi, and extremely rich colors.

The displays themselves offer a sharp, noise-free picture to each of your eyes, and pixel structure is virtually indistinguishable to my eyes. That said, small text is definitely harder to read than on a true 1080p display, but gameplay and movie content looks great. I encountered no motion blur to speak of, though I did see a little bit of a “blooming” effect which is a typical side-effect of self-illuminating displays. There’s also a small amount of blue fringing around high contrast areas of the image, such as white on a black background. But these issues are minor, and I still found the displays to be on-par or better than other HMD screens I’ve used before. They’re definitely sharper than the displays in the current build of the Oculus Rift, and nearly as good as the displays in Sony’s HMZ-T2 – a competing display with higher resolution OLED screens that’s major downfall is a lack of portability and its very poor comfort. Comfort is definitely not an issue with the Cinemizer. 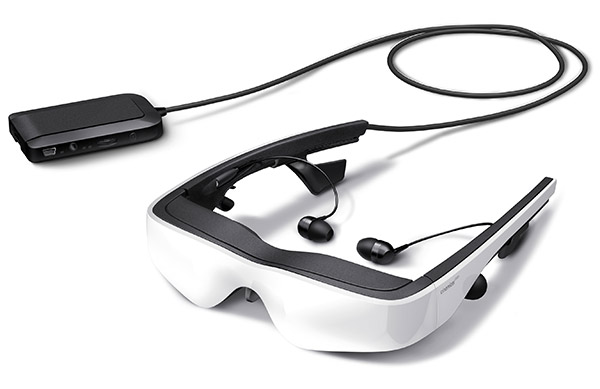 The Cinemizer offers diopter adjustments for each eye, so they’re easily tweaked to your individual vision, so you don’t wear your glasses while wearing them. While watching content, the displays simulate a 40-inch widescreen display, viewed at about 6.5 feet away from your eyes. While this isn’t as immersive as the Oculus Rift, or going to watch a movie in IMAX, it’s certainly more immersive than playing games on most computer monitors or watching movies on your laptop or tablet screen. By design, you can still see outside of the glasses a bit, so you can occasionally look at your keyboard, mouse or game controller, but there’s also an optional rubber eyeshield which can plunge you into movie theater darkness. 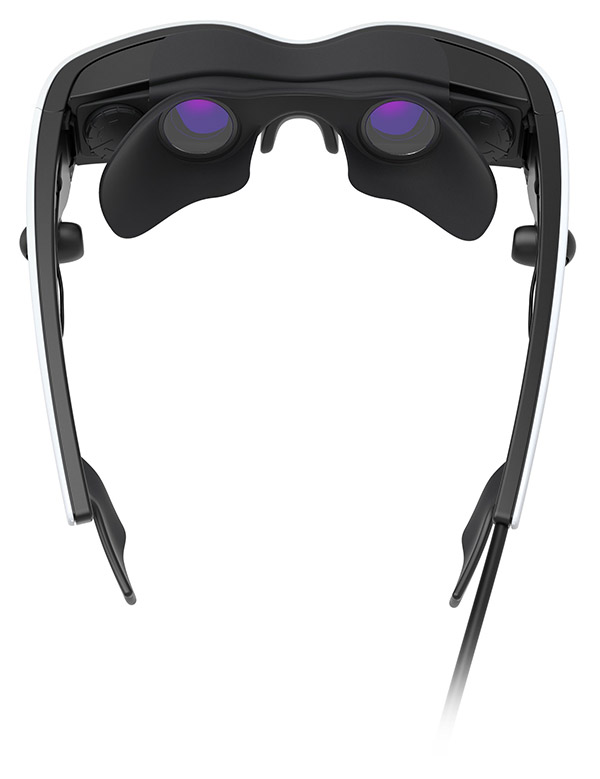 One big advantage the Cinemizers offer is that they’re battery powered. The included USB-rechargeable battery pack is good for anywhere from 2.5 hours to 6 hours, depending on whether you’re feeding it with a digital or analog video source. I only tested it with an HDMI input, and got enough battery power to watch the entirety of Avatar. And speaking of Avatar – the Cinemizers support stereoscopic 3D. Since each eye views an independent image, there’s no flicker, and no decrease in brightness like you get with displays which require 3D glasses. I found the 3D image quality to be quite good – though the depth isn’t as impressive as the 3D I get from my Samsung plasma display or from an IMAX 3D theater. That said, the 3D is definitely a nice bonus. 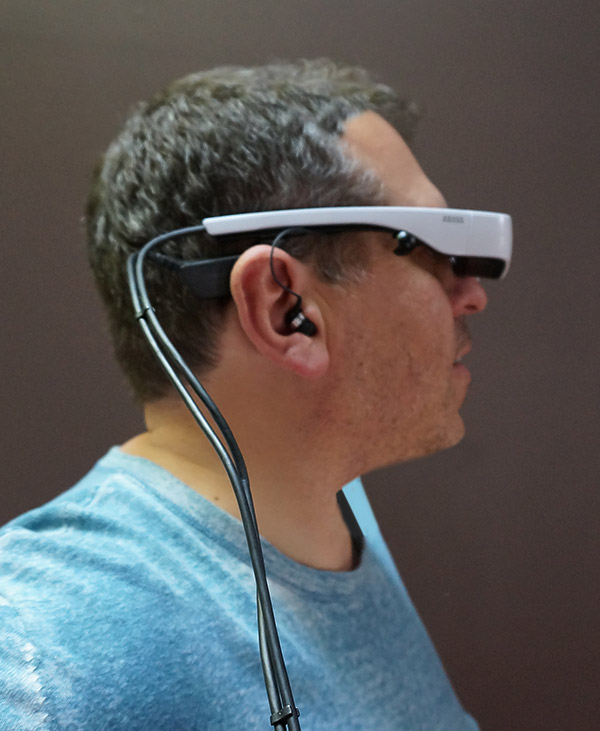 I tested the Cinemizers with their optional head-tracker module, a small USB device which replaces one of the adjustable ear pads. This gadget emulates the movements of a standard USB mouse, so any game that uses a mouse to look around can be used with the Cinemizer’s head-tracker. This worked seamlessly on all of the FPSes I could throw at it on my Mac and my PC, and it definitely made looking around in games more intuitive and immersive than with a mouse. That said, to use the head-tracking feature on a PS3 or Xbox 360, you’ll need to pick up a third-party adapter, such as the Penguin Eagle Eye, which sells for about $60. There’s also support for full X/Y/Z axis tracking when using the appropriate SDK. 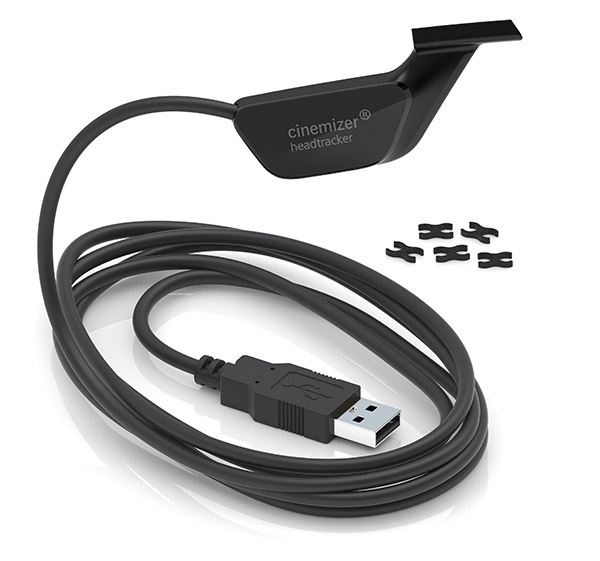 In addition to playing games and watching movies, I could also imagine the Cinemizers working well for first-person view piloting of remote-controlled vehicles and drones. There’s also an optional $79 adapter for plugging in iOS devices, which replaces the standard HDMI output module of the Cinemizer, but only works with devices with a 30-pin connector. This could definitely come in handy for watching movies on long trips.

There are just a couple of minor complaints I have with the Cinemizer. One, they come with built-in earbud jacks and a pair of earbuds for privacy. That’s all well and good, but the audio quality is weak and tinny. Thankfully, there’s a headphone jack on the battery pack so you can use your own headphones. My other complaint is that the cabling is a bit bulky when using the head tracker. It would be nice if there were a single molded cable that carried both HDMI and USB signals, but instead, you end up with a pair of cables sticking out of the glasses, and then another cable sticking out of the battery pack to connect an HDMI cable into. I also wish the rubber eyeshield were included. When you’re spending $800 or more on device, you’d think they could throw those in rather than charge you another $39 for those. And while they throw in a handy carrying case, it’s not quite big enough if you’re trying to cram in the glasses, the head-tracker and all of its cables. 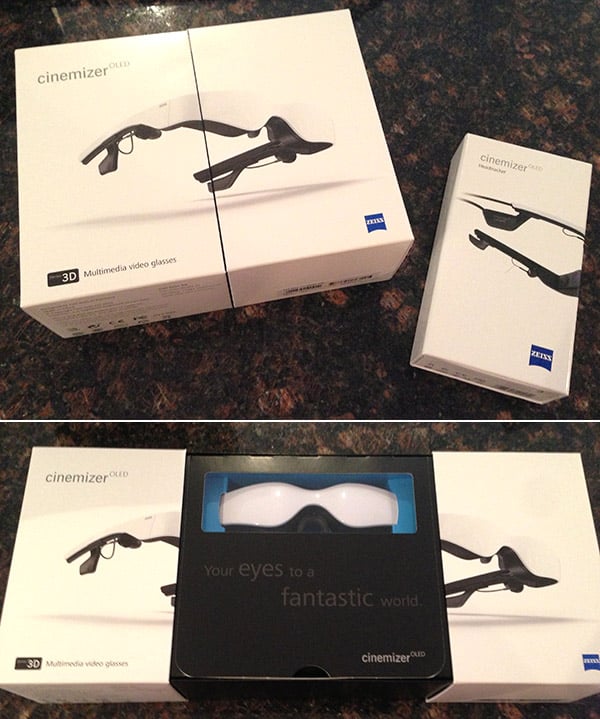 Overall, I was impressed with the Cinemizer. It’s a nifty device, and is portable enough that you could take it on the road to really enhance your private video viewing experience. It’s lightweight and comfortable and is compatible with standard video sources. Plus its optional head-tracker is great for playing FPSes and racing games. The biggest thing standing in the way of the Cinemizer is its price. The goggles themselves list for $799(USD), and the head tracker will add another $229. $1000 will buy a you any of a number of good LCD and plasma TVs these days, so unless you really need privacy while playing content, it’s tough to justify the expense. Hopefully, the price will be driven down with time as the cost of components comes down.