STAR.V3 Robot Crawls into our Hearts

There’s something so neat about robots which are built to replicate the movements of animals and insects. But this biologically-inspired little guy has a gait all his own and makes me want to have one as a pet. 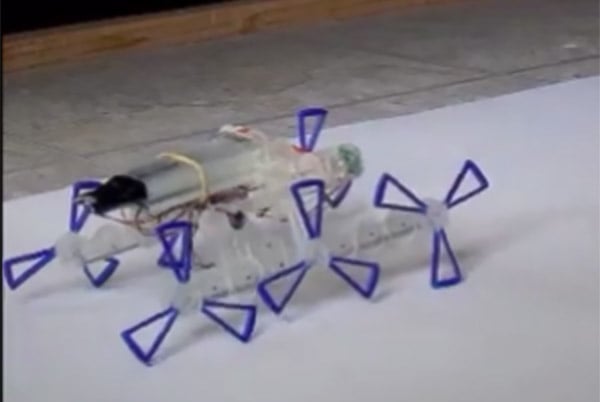 The STAR (Sprawl Tuned Autonomous Robot) was created by David Zarrouk, Andrew Pullin, Nick Kohut and Ronald Fearing at UC Berkeley’s Biomimetic Millisystems Lab. The 3D-printed robot uses six spinny “legs” can adjust its sprawl angle in order to navigate over difficult obstacles, so its little legs can change the amount of ground-clearance they offer. This allows the robot to scurry its way under doorways and other small spaces, and then resume walking normally – if normally means running around like a crazed millipede on speed.

STAR has had two prior versions, with this one getting some mechanical improvements as well as reinforcements to help keep it together after collisions.

Top speed for the STAR.V3 robot is a whopping 5.2 meters-per-second. That means that it can run 43 of its own body lengths every second. This agile robot can also climb over loose rocks, and even right itself if it flips over. Oh, and it can play pool.