The Etch a Sketch has been used for many things in the past, but I think this is the first time that we have ever seen a TV show recap drawn out on one. Hey, drawing on the Etch a Sketch sure beats cooking meth. 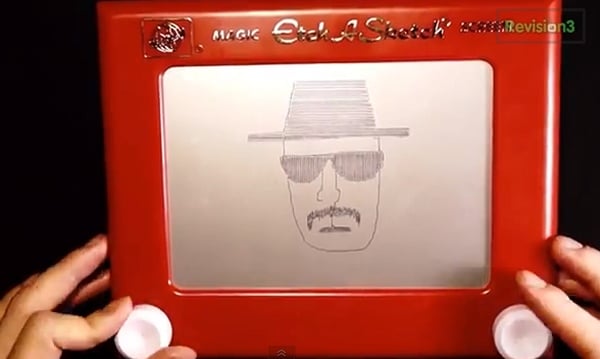 Well, it is not nearly as lucrative of course. Not nearly as adventurous. But it’s an honest toy, that won’t get you into any trouble. I don’t think. Anyway, I present to you this awesome Breaking Bad recap of seasons 1-5 as told by Etch a Sketch drawings and narration. And it goes without saying… SPOILER ALERT…

Todd’s Sketches is a web series that draws everything “from pop culture to news to whatever happens to be on his mind” using his Etch a Sketch.

This is the premiere episode. Enjoy.