You gotta love videogame marketing. First we got, pre-orders, then DLC, then exclusive DLC based on where your pre-order. Now they’re using pre-orders as viral advertisements. If you thought the $190,000 (USD) pre-order bundle for Grid 2 – which included a street legal race car – was ridiculous, get ready to hit your computer with a penetrator bat. 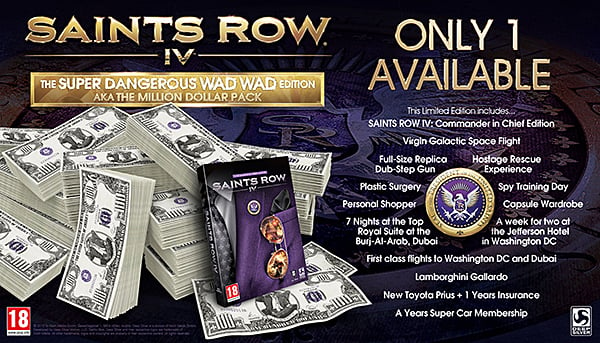 The upcoming balls-to-the-wall insanity simulator that is Saints Row IV has a pre-order bundle exclusive to the UK store Game. It’s called the Super Dangerous Wad Wad Edition, and it costs $1,000,000. That number becomes a tad sillier considering only people in England and Wales can buy it. They should’ve just priced it an even £645,000. So what does that obscene amount of money get you? Let’s hit the image above with the Inflator Gun: 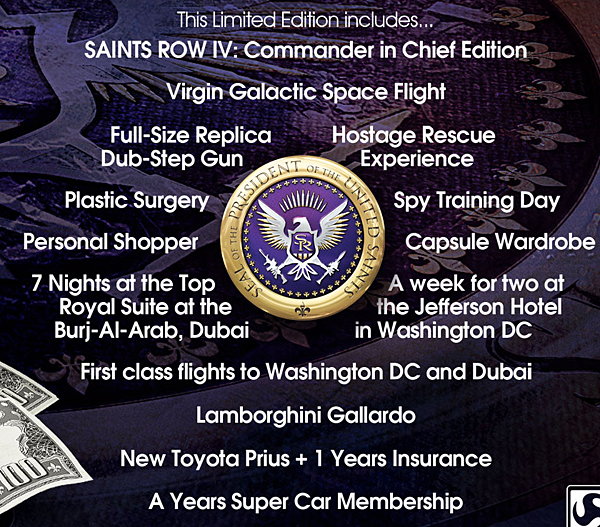 A Lamborghini Gallardo? Sweet! A trip to space? Whaaat! Plastic surgery? Yeaiiee- wait what? That bit makes me think that this bundle is either a joke or, well, a joke. On the pre-order page, it says that the person who buys this bundle has to accept that the “content of the ‘Super Dangerous Wad Wad Edition’ must be taken as stated and cannot be deferred.” The buyer’s going to get a plastic surgery whether he likes it or not. And after he’s done getting a new nose, he’ll still have to pay $10 to get the game’s DLC because the Season Pass isn’t included in the bundle. That’s how the 3rd Street Saints do.

[via Game via Joystiq]