Tagtal tStylus Has Drag & Drop Copy & Paste: What You See is What You Copy

The ability to to make perfect copies is one of the most convenient advantages of working with digital content. That’s why software developers make it easy to copy and paste content between applications. But what about copying and pasting to and from different computers? What if you could drag content from one screen directly to another screen? That’s what the people behind the Tagtal tStylus claims it can do. 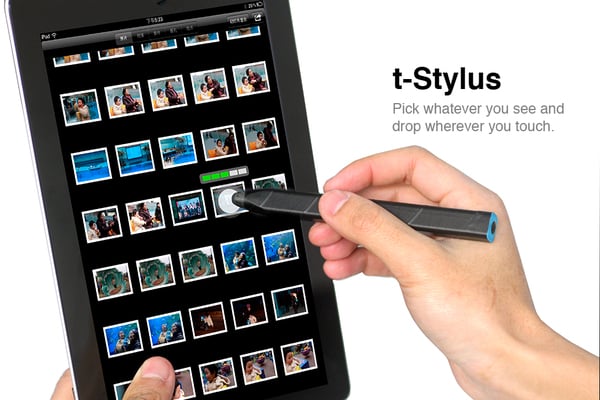 The tStylus works with companion desktop and mobile apps to let you copy what’s on the screen of a desktop computer or an iOS device, and then transfer that to another iOS device. All you have to do is press the tStylus on the screen of the source device, wait a couple of seconds, then do the same on the recipient iOS device. The devices don’t need to be connected in any other way; they just both have to have the tStylus app. Once you’ve dropped an image, you can trim it down using the tStylus.

Aside from transferring screenshots between devices, there’s also a specialized tSylus app called Tagtal Album, which you can see in the image above. With Tagtal Album you can copy and paste images to and from Instagram, Facebook, Picasa or Flickr using the tStylus.

Finally, the tStylus app also has a color picker feature:

Pledge at least $29 (USD) on Indiegogo to receive a tStylus as a reward. Tagtal claims that the stylus will eventually be sold for $80, so you’re getting $51 off. If they add the ability to copy text from one device to another, I’m sold.