Nokia Lumia 1020 Review: It’s All About the Photos

The folks over at Nokia were kind enough to put one of their Lumia 1020 Windows smartphones in my hands for the last couple of weeks, so I’ve put together some of my thoughts on the device to share with you here. 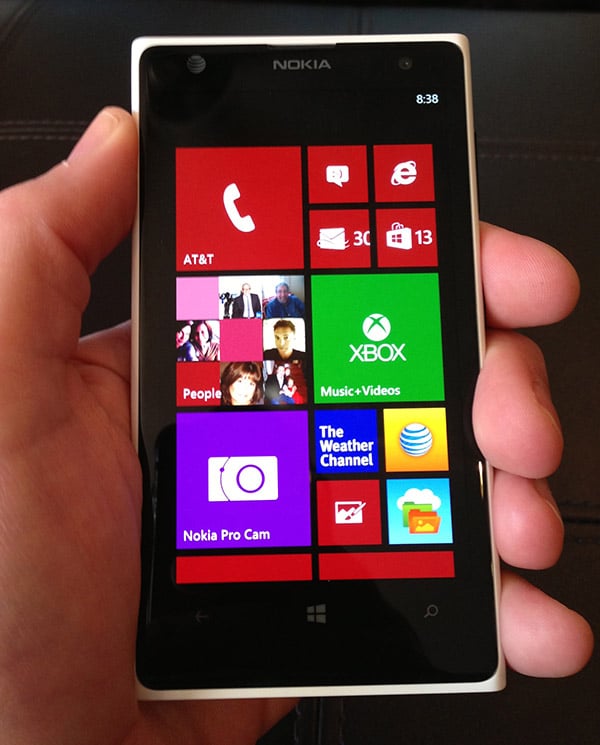 As you’ve probably seen in the commercials, the Lumia 1020 touts a camera with an incredible 41 megapixel sensor, which makes it the highest resolution camera phone on the market by a great deal. The phone is no slouch in other departments either, running the latest build of the Windows Phone 8 operating system, and offering full HD video capture as well. It also offers stereo microphones for high quality audio recording. It works on major 4G data networks, including LTE and WCDMA standards, along with 802.11 a/b/g/n, Bluetooth and NFC support. 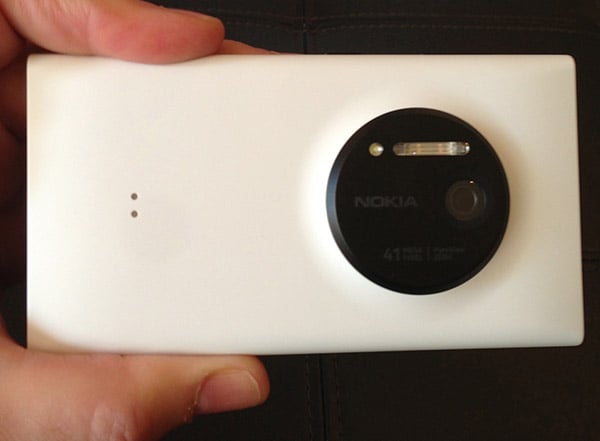 The phone itself looks sleek and modern, coming in a white, yellow or black polycarbonate shell, with a bright 4.5″ AMOLED touchscreen at 1280×768 resolution. This results in a pixel density of 334 ppi. The colors and rich blacks on the display really look awesome, though it is a bit of a fingerprint magnet. Under the hood, it’s powered by a Qualcomm Snapdragon S4 processor. Measurements for the Lumia 1020 are 71.4mm (w) x 130.4mm (h) x 10.4 (mm) thick. That added thickness is due to the camera’s lens and xenon flash assembly which protrudes from its back. The main body of the phone is actually a couple of millimeters slimmer. In fact, it’s virtually the same thickness as my iPhone 5. 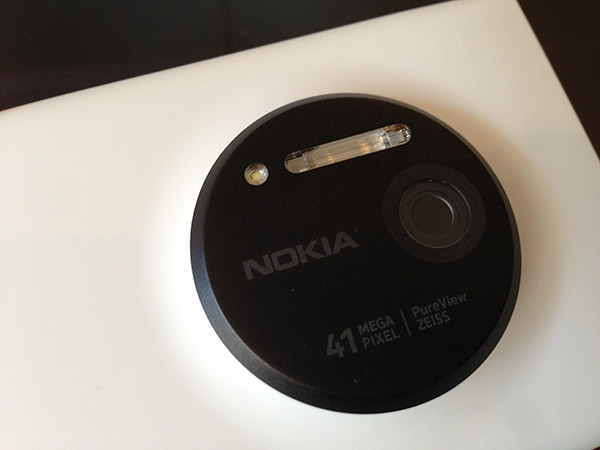 Having that camera lens assembly on the back of the device – plus a dedicated shutter button – really does make a statement that Nokia wants this phone to replace your camera, and in a lot of ways, they’ve succeeded. Not only does the camera capture incredible amounts of detail, but it offers manual controls heretofore not found on smartphones or point-and-shoots.

The 41 megapixel sensor is Nokia’s solution to the zoom lens problem. Since it’s thus far been impossible to cram the optics of a high-powered zoom lens into a smartphone, Nokia opted for the highest resolution sensor they could find, combined with the largest lens the could cram into a phone’s form factor. This combination results in the ability to zoom into your images AFTER you take them, instead of trying to frame them up at the time you shoot. In my experience with the Lumia 1020, this is very effective – especially in daylight shots. Take a look at the image below for a zoomed out view along with a zoomed in portion: 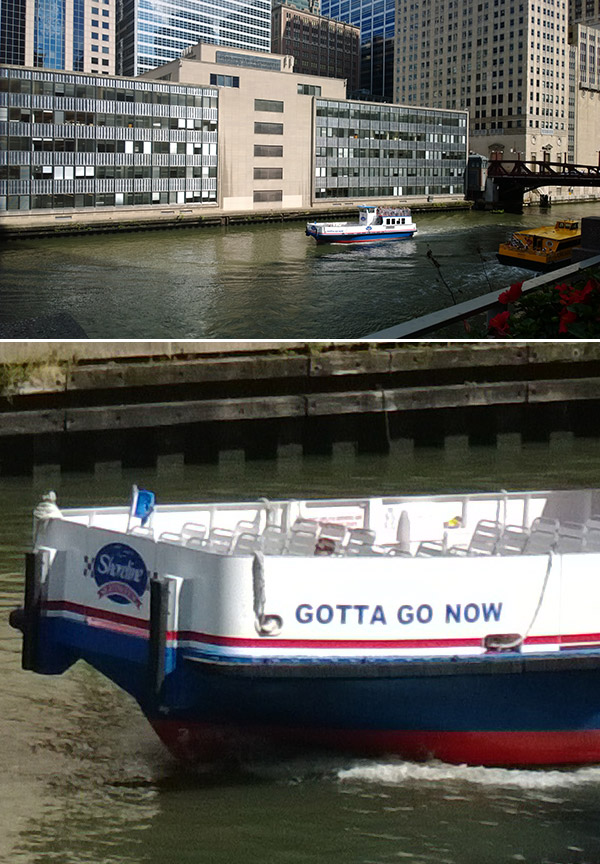 Pretty incredible, no? Sure, there’s a bit of grain in the closest up portions of images, but it’s still impressive that you can get that sort of detail from a smartphone camera. Despite its 41 megapixel sensor, one thing I found odd is that the highest resolution 16×9 image the camera stores are actually 34 megapixels (7712 x 4352 resolution), along with a 5 megapixel (3072 X 1728) version for sharing. If you switch into the 4×3 aspect ratio, you can shoot 38 megapixel images. Either way, it’s way more pixels than your current phone has. 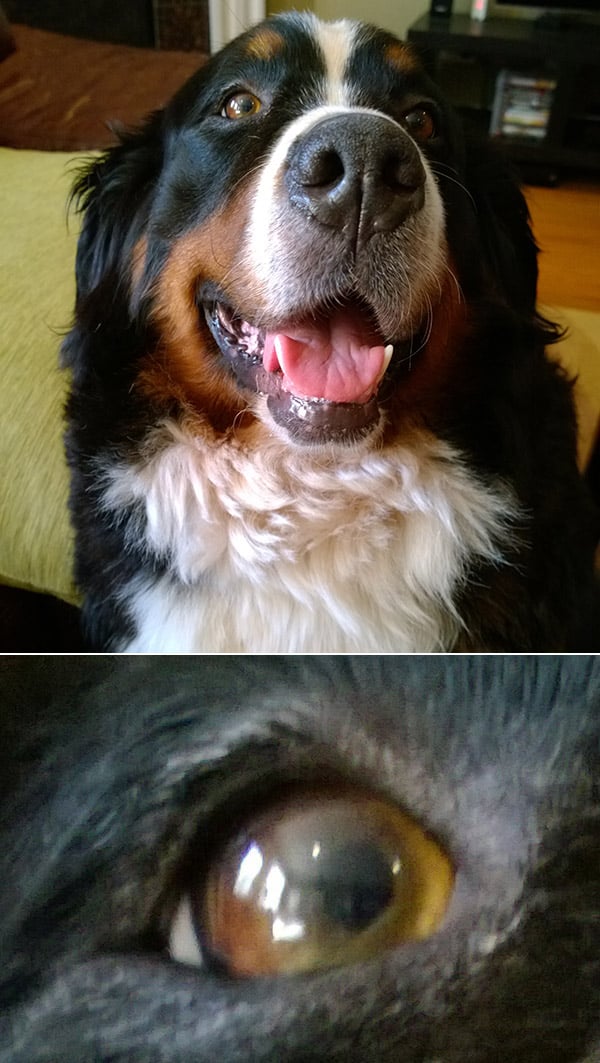 As I mentioned, the camera offers manual controls, which include white balance, focus, ISO (100 to 4000), shutter speed (1/16000th to 4 seconds) and aperture (from -3.0 to +3.0 ). All of these controls are accessible within the Nokia Pro Cam app, the default app that’s tied to the shutter button. Accessing manual controls requires a simple touch and drag action from the icon on the right of the screen. This reveals slider controls which provide immediate visual feedback of everything but shutter speed (which makes complete sense.) You can also go into the settings menu to enable a grid overlay to help with your composition, in rule of thirds, golden ratio, crosshairs or square variants. 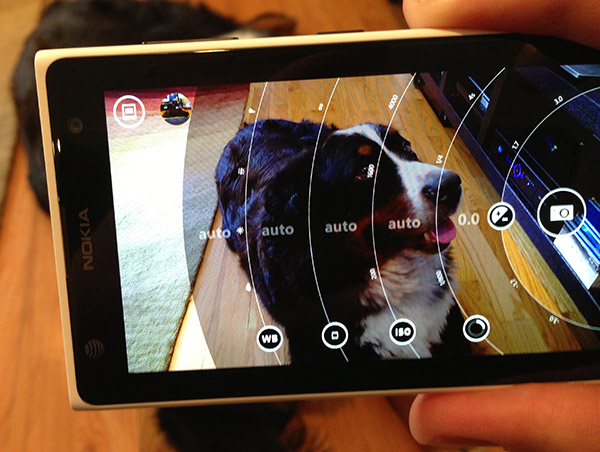 I’m not an expert on camera optics, but I’m pretty sure they have to do these things digitally. Regardless, these fine-grained controls allow for images you definitely can’t produce with post-production image software. For instance, being able to capture long-exposure night shots or true depth of field focus effects. 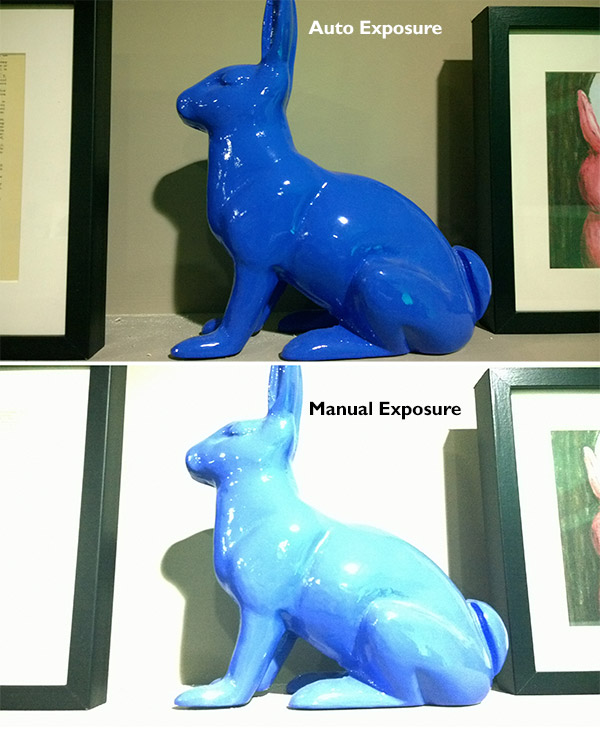 One other nicety is that Nokia includes a library of short tutorials for budding photographers, which provide interactive examples of what each of the controls does, along with pointers on various photographic techniques. The lessons aren’t deep, but they’re a great thing to have if you don’t know your aperture from your ISO. 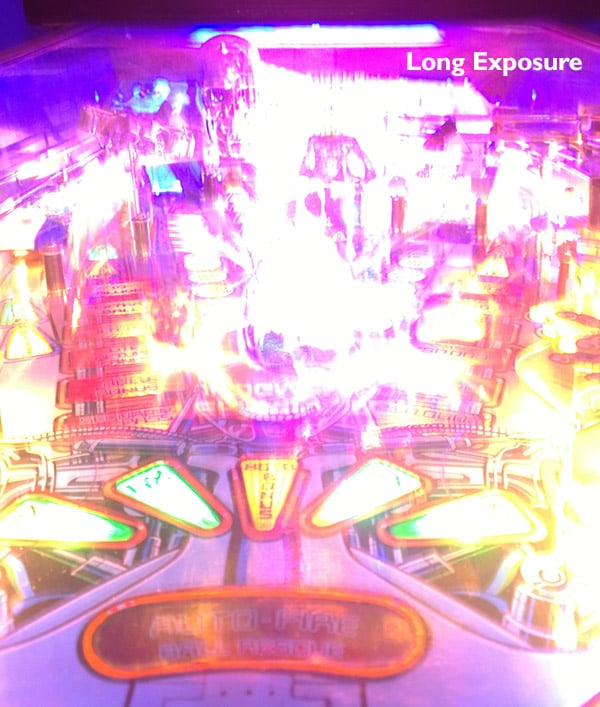 In order to put the camera through some of it’s paces, I captured a few images at this weekend’s Wizard World Comic Con in Rosemont, Illinois. Here are some sample shots.

Be sure to click on the images to see the full hi-res originals: 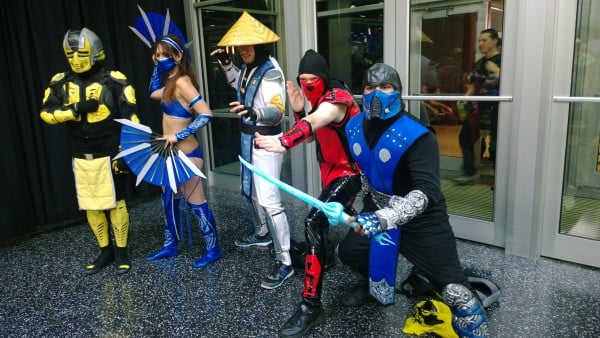 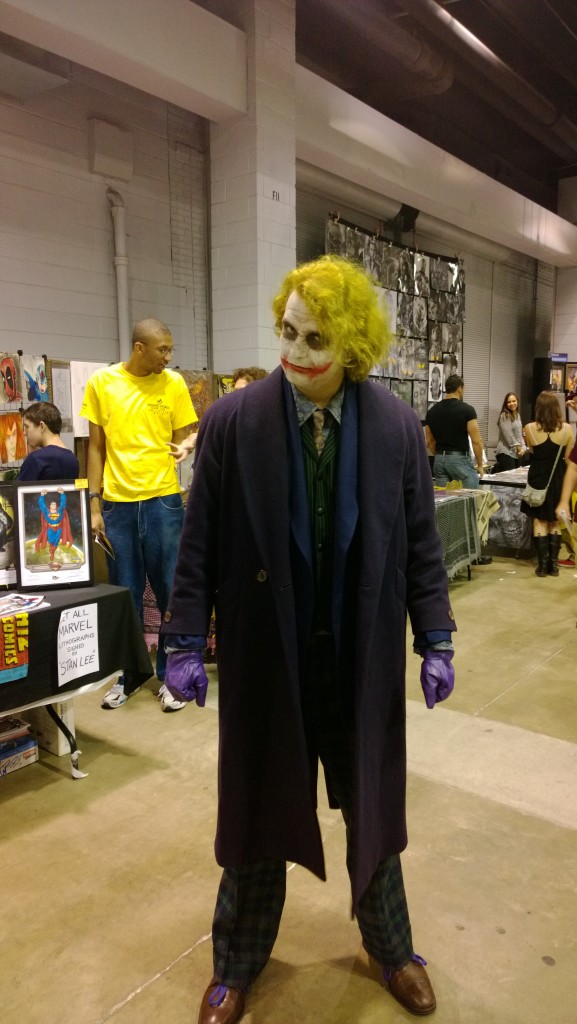 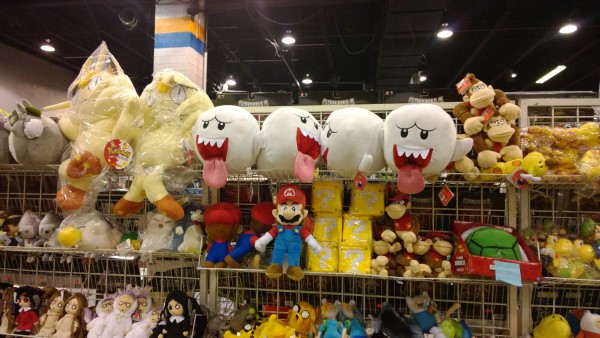 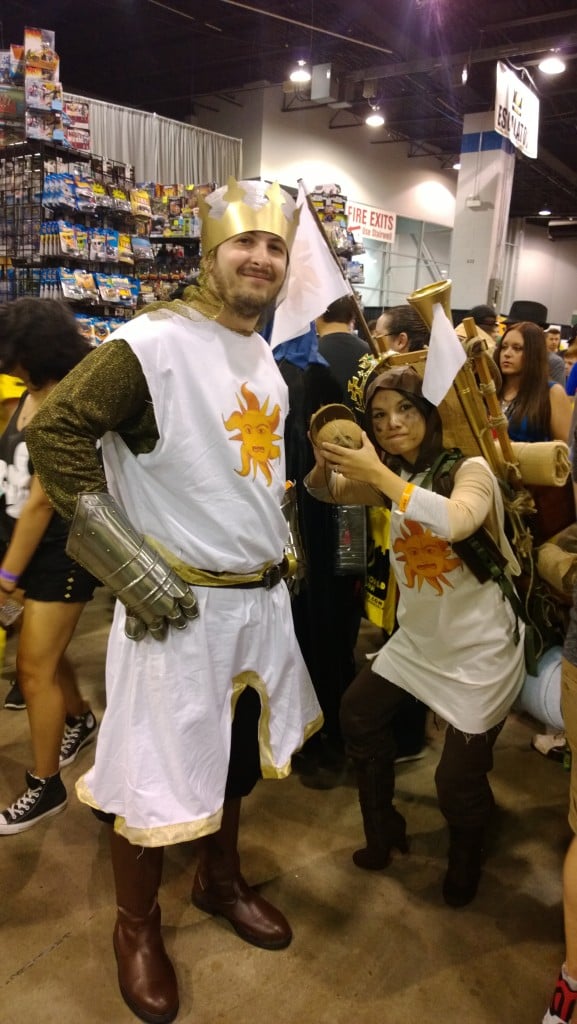 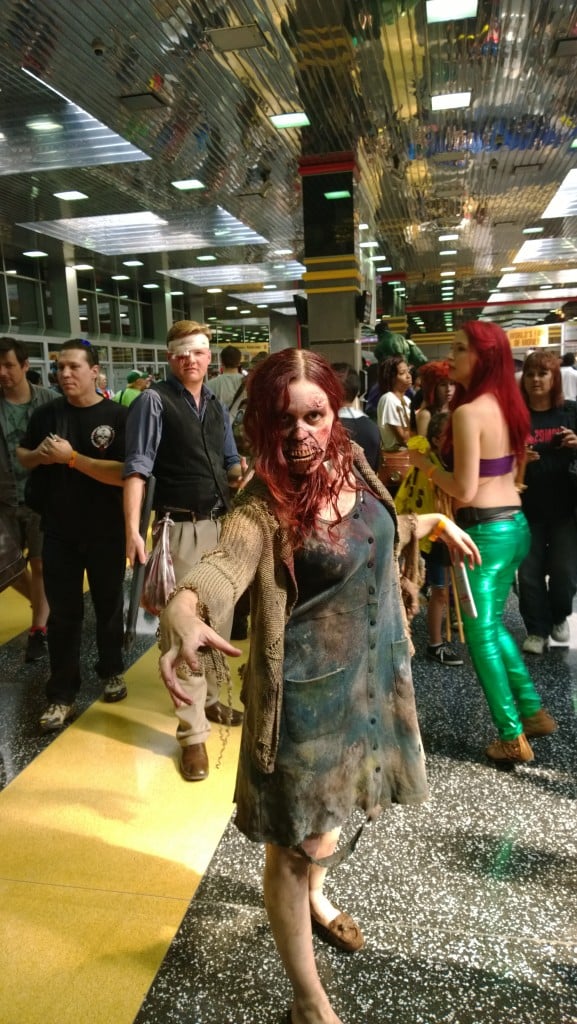 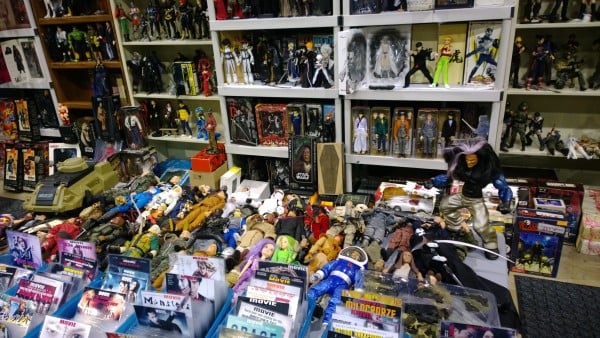 There’s no question from those examples that the images are detailed, and capture colors impeccably – especially with good lighting. There’s a sort of pastel effect if you zoom in all the way, but I’m still impressed – especially compared to every other smartphone I’ve ever used. Nighttime shots do suffer from added grain, but I don’t think they can do much about that unless they could put a bigger lens on this thing. Here’s a closeup shot I grabbed in near darkness, with no flash and the ISO jacked up to 4000. Not bad. Try this with another phone. Click image for hi-res original: 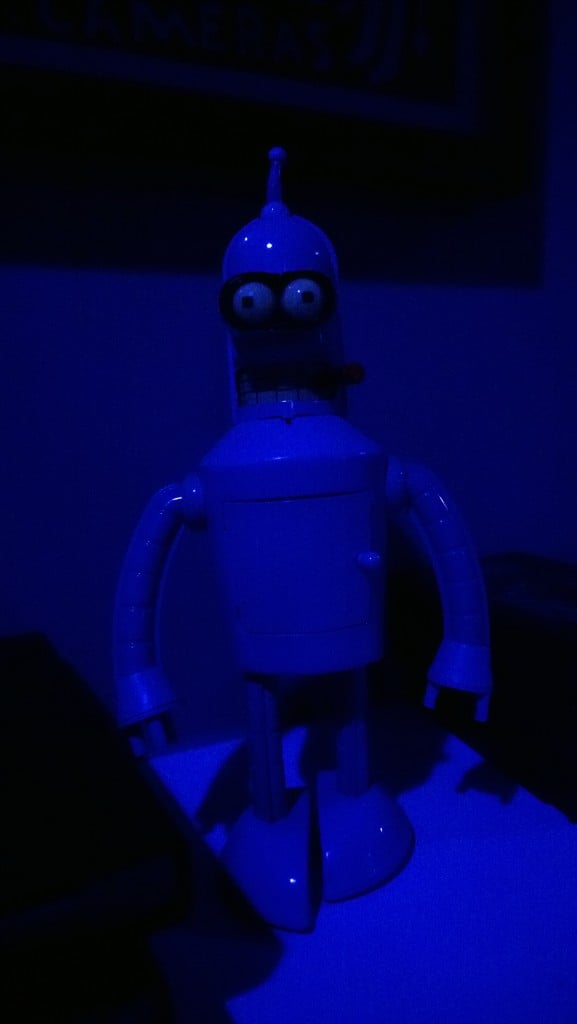 The camera also works with Nokia’s Smart Cam app which allows you to capture multiple images in rapid succession so you can pick the best image, create composite motion shots or even remove moving subjects from the scene. There are also a variety of “lenses” you can download from the Windows Phone Marketplace for adding effects to your images.

One thing that is a bit irksome is that there’s not an easy way to share the full hi-resolution images from the phone. Microsoft Skydrive, email and social networks all seem to get a low-resolution 5MP version instead, so the primary way to pull full-res images off of the phone is to connect it to your computer. If you happen to be an AT&T user (which was the carrier for my review sample), there is a way to save hi-res images with their AT&T Locker service – which offers 50GB of free storage. 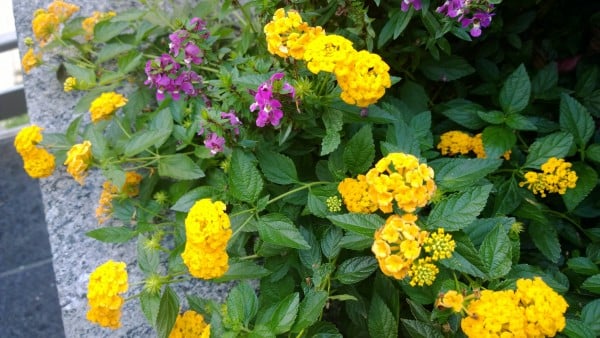 Individual hi-res image files can be quite large (9 to 15MB each), so you’ll definitely want to be conservative about when you upload hi-res images if you’re on a mobile data plan anyhow. As a Mac user, I also couldn’t get the Lumia to transfer directly to iPhoto either. You have to download an extra app to transfer images for some strange reason. I also found it difficult to locate images imported into iPhoto. The best thing was to create a Smart Album for images from the Lumia 1020. That worked like a charm.. Ah, the Microsoft vs. Apple battle rears its ugly head once more.

Still, once the photos are transferred, they’re quite impressive. Video quality is very good as well, with the main camera capable of shooting full 1080p action at 30fps (or at 24 or 25fps). Like most smartphone video cameras, it does quite well in daylight conditions, but definitely exhibits noise in the dark. Unfortunately while shooting video, the manual controls are limited to flash, white balance and focus, so you can’t increase ISO to see if that can help. Here’s couple of quick samples I captured, one with ample lighting, the other without.

As for the phone itself, there’s not too much to complain about. It’s plenty fast for tasks ranging from email to browsing the web, to playing games – and the Windows Phone 8 interface quickly grows on you. The only real issue with the OS at all is the relatively small number of available apps compared to iOS and Android. I won’t really go into the Windows OS itself, as it’s pretty much stock, with the addition of a few useful Nokia apps, such as HERE Maps and Drive for mapping and navigation as well as Nokia Music.

Phone call quality was satisfactory, but nothing to write home about (or maybe that’s just the AT&T network). I also found battery life to be less than thrilling. With typical usage (and standby time sitting in my pocket,) I was down to about 25% battery life after 10 hours. In the same conditions and time, my iPhone 5 still had 42%. That said, I spent much of my time in areas with poor coverage or too many people (i.e. a convention center), so I’m sure that some extra battery was burned while it was searching for a connection.

That all said, as a camera, this thing rocks. No, it’s not going to replace a high-end DSLR, but Nokia has definitely raised the bar for smartphone cameras, and all but killed what’s left of the point-and-shoot market with this thing. If you want a good Windows phone, you’ll be totally fine with a Nokia 920 or 928. But if you’re looking for a smartphone that is first and foremost capable of taking impressive photos, you won’t be disappointed in the Lumia 1020.