Haptix 3D Multitouch Controller: You Are the Mouse

A few years ago we took a look at Pranav Mistry’s Mouseless, a prototype for a camera-based pointing device. Now, a startup called Haptix Touch is raising money on Kickstarter for a very similar – and possibly better – product. It’s called the Haptix, and I would love to trade my mouse for it. 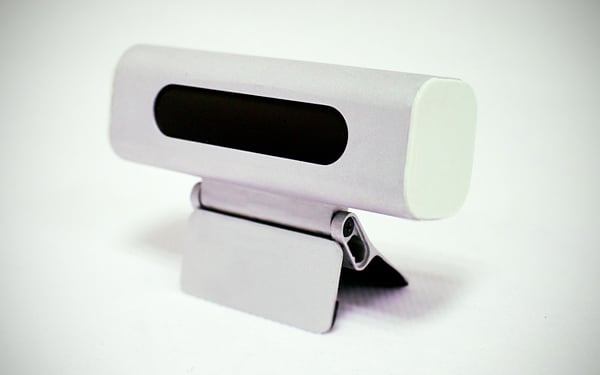 Haptix turns any surface into a multitouch interface. It connects to computers via USB and uses two CMOS image sensors and a patent-pending algorithm. Like Mouseless, Haptix also has an infrared tracking mode for low light situations. In my brief chat with Haptix Touch Co-Founder Darren Lim, he said that the Haptix can track and assign different functions to up to 10 objects. For example, you can map your index finger to the mouse cursor, your thumb for left click, and so on. You can even tell it to ignore an object. This means you can use your table or desk as a touchpad, use a pen to draw or sketch in an image editing program or  – my favorite – use your keyboard as your mouse.

Pledge at least $65 (USD) on Kickstarter to get a Haptix controller as a reward. The current version of Haptix works with Windows 8 and other touch-optimized programs out of the box. Lim said it will support Android and OS X devices by the time it’s commercially available, which is hopefully near the end of 2013. Lim also said they will release the developer API and dev kits after Haptix is launched.