Mini Weapons of Mass Destruction: Build Your Own Armory with Ease

With all of the controversy going on regarding “real” weapons, what with their ability to cause bodily harm, it’s best to stay out of the eternally-burning fire of this argument. Instead of going to Walmart and purchasing an assault rifle, why not save yourself some money and some responsibility? Get the Mini Weapons of Mass Destruction series! 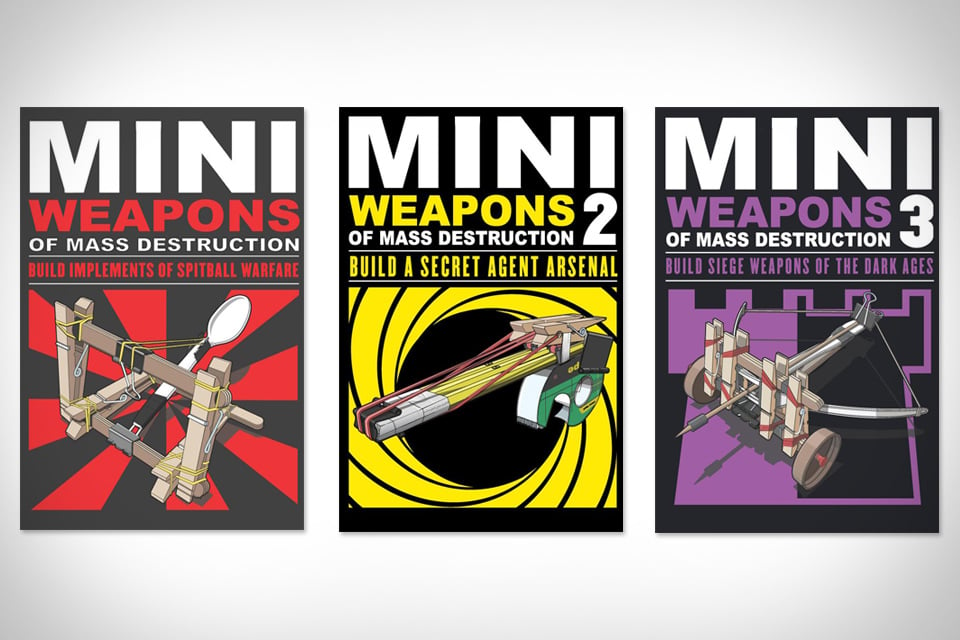 You may be too daft to build your own M-16, but there’s no need to be dismayed! With Mini Weapons of Mass Destruction volumes 1, 2, and 3, you will become an unstoppable force of forcefulness.

In the first volume of the series, you will embark upon a quest to create 35 different weapons, including catapults, slingshots, minibombs, darts, and combustion shooters. While I do not know what minibombs and combustion shooters are, the book assures us that these items are relatively safe. For someone who fell down while carrying a fork a couple days ago, driving it into my upper thigh, I am forced to reevaluate the idea of “relatively safe.” I was also banned from using the glue gun. (Plus glitter glue, since I put it all over my chest and pretended I was Edward Cullen.)

The second and third volumes of Mini Weapons of Mass Destruction will further increase your knowledge of tiny-person violence, introducing you to paper dart watches, toothpaste periscopes, chopstick bows, bottle cap crossbows, and many more! If you ever wanted to build your own bottle cap crossbow, then now is your chance! (That little gem is located in the third volume.)

Of course, each book includes practice targets and tips for hiding your own personal armory. You’ll have to ante up $13 for each volume, but the money is well worth all of the revenge that you can exact! (Without incurring any serious legal troubles.) You can find all three Mini Weapons of Mass Destruction books on Amazon.