Robert Morris and Daniel McDuff are currently studying for their doctorate degrees at MIT. But even geniuses get addicted to Facebook. Robert and Dan confessed that they collectively spend about 50 hours a week on the social networking site. To get rid of their bad habit, they decided to undergo a literal shock treatment. 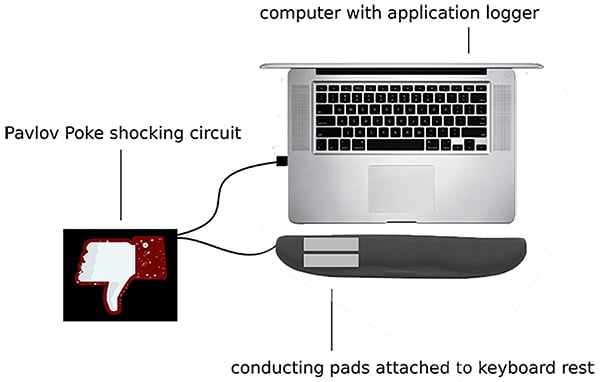 Named after the famous physiologist Ivan Pavlov, the Pavlov Poke is an Arduino-based system that connects to a computer via USB. It works with a program on the computer that monitors application usage; Robert and Dan used the UI Inspector in OS X. If it detects that you’re visiting a specified site or sites – in this case it’s Facebook – too frequently, it will flash an alert on screen and send a current to a couple of conducting strips that are stuck on a keyboard rest.

If being electrocuted won’t be enough to stop you from checking your feed, you can try the outsourced equivalent of Pavlov Poke. It still uses an application monitor, but this time it uses a Python script that asks people on Amazon’s Mechanical Turk to call you whenever you’re slacking off.

I think the second one’s more effective. Not only is it more annoying, the cost for the calls alone may be enough to reform you. Head to Robert’s website to learn more about Pavlov Poke, but only if you’re done working.