Nintendo’s announcement of the Nintendo 2DS is one of the most surprising developments in the gaming world this year. As an entry-level variant of the Nintendo 3DS, the 2DS can play all 3DS games and thousands more DS games. But unlike the 3DS and the 3DS XL, the 2DS can’t be folded. It’s upper screen also can’t display stereoscopic 3D, hence the lose-lose situation regarding its name. It’s an honest name, but for some people it will be like being told that a Honda Bivic exists. And it’s a Civic.

According to Kotaku, the 2DS’ screens are the same size as the ones on the 3DS. The lower screen is still a touchscreen and the 2DS will also come with a stylus. But as you can see its Circle Pad and face buttons are on the upper half of the device. I think the buttons were shifted up so that the shoulder buttons – which are at the top of the device – will still be within your index finger’s reach while your thumbs are on the Circle Pad and face buttons. 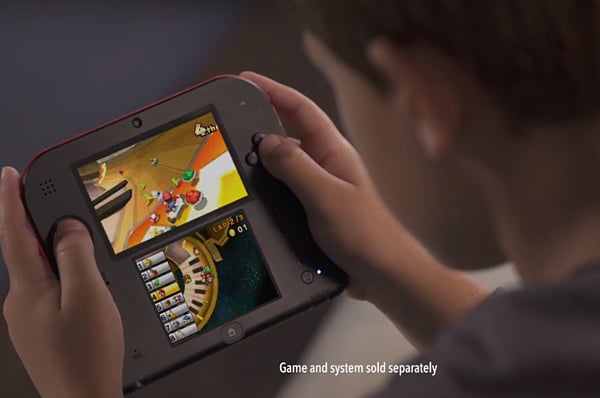 Aside from the “slate” form and the lack of a stereoscopic 3D display, the 2DS has a few other deficiencies compared to its big brothers. For one, it only has a mono speaker, but you can still get stereo audio via its headphone jack. It also has no physical Wi-Fi switch; you’ll have to toggle that from within the menu. So it’s a lesser device, but that means it also has a lower price. It will only cost $130 (USD), $40 cheaper than the 3DS and $70 cheaper than the 3DS XL.

*Update: Kotaku also shared Nintendo Europe’s nifty comparison chart (pdf) between all three 3DS models.* The Nintendo 2DS will be available on 10/12/2013, which is also the day Pokémon X and Y are released. That timing should help push units right from the get go; it will be enough for many people to see that the 2DS can play the latest Pokémon game. But only time will tell if Nintendo’s questionable naming scheme and hilarious yet also depressing decision to ditch their system’s main feature will pay off.

Will customers think that there are 2DS games? Or that the 2DS can’t play 3DS games? Will developers still care about the quality and functionality of stereoscopic 3D in their 3DS games? Will Nintendo finally realize that they have to come up with a practical naming scheme for their devices? Seriously, why didn’t they just name it the 3DS Jr.?