If you think back to when flatscreen TVs first hit the market one of the things that a lot of people wanted to do was mount them on the wall. The problem with mounting most LCD and plasma TVs on walls is that they’re often too thick and heavy, and most of them just ended up sitting on entertainment centers. Now there are incredibly thin-profile OLED screens coming to market that will definitely be skinny and lightweight enough to hang on the wall like a work of art. 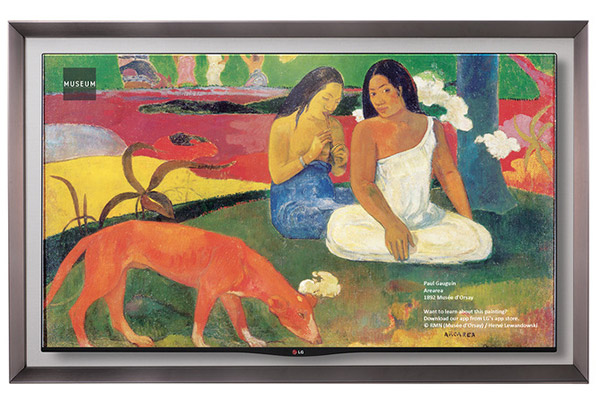 LG has unveiled their new Gallery TV (model 55EA8800) that uses an incredibly thin OLED panel inside of a bezel that looks like a picture frame. The overall effect is of a piece of artwork hanging on the wall inside of a custom frame. That frame does more than just look good, it also hides the television’s speaker system called Canvas Speaker 2.2.

Taking the picture frame effect even further, the TV ships with a gallery mode and preloaded digital images of artworks from famous artists. Buyers can also put their own images and artwork on the TV and have them display in gallery mode as well. Pricing for the TV is unknown at this time, but knowing how much other OLED sets are going for, I’d expect it to be somewhere around $10,000(USD).