Got a few minutes to spare? Then don’t check out Salty Bet, because it will take those minutes and turn them into hours of lost time. Salty Bet runs an endless livestream of computer-controlled matches on M.U.G.E.N., a free and highly customizable fighting game. It has a massive stable of characters from various fighting franchises and then some. Seriously I wouldn’t be surprised if I saw a match between a Betamax tape and my neighbor’s dog. 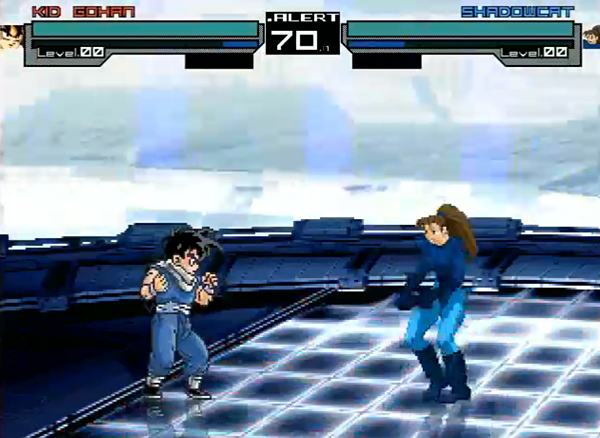 Yep, that’s Son Gohan from Dragon Ball Z, and he’s up against Shadowcat from Marvel Comics. So far I’ve seen Kuchiki Byakuya of Bleach, Rikuo of Darkstalkers, Jill Valentine and some robot that just turned into a rocket ship and flew away.  And it didn’t come back. Seriously this game is nuts. Don’t believe me? Here you go:

Salty Bet is free to join. If you sign up, you get virtual currency, which can only be used to bet on the matches. It has no other value or purpose. The real benefit of becoming a member is that you can join the website’s chat, which is half of what makes Salty Bet such an addictive time waster because the folks there are as freaked out about the matches as you are.

Salty Bet also has a paid membership with a few fringe perks, but trust me you can lose hours just lurking on the site. The game is hilariously bizarre and unbalanced and the folks on the chat are funny, although their language is indeed salty. Now if you’ll excuse me, I have to watch Shuma-Gorath lay the smack down on Link.