Livescribe pens are popular and powerful recording tools, but they only work with Livescribe’s own notebooks. A new product called the iSketchnote can’t record audio, but it presents a cheaper and more intuitive way of recording your drawing or writing. I think it can also be a good way to introduce luddites to the wonders of technology. By technology, I mean the iPad. 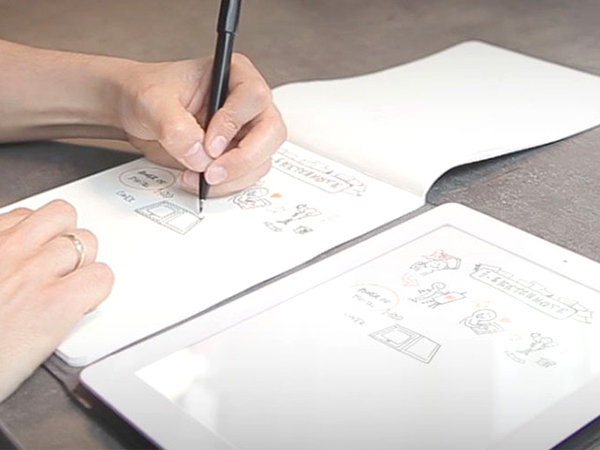 The first model of the iSketchnote will be an iPad cover. The back of the cover has an array of sensors where you’ll place any A5-sized paper or notebook. The iSketchnote pen is just a normal pen except it has a ring-shaped magnet embedded inside. When you fire up the iSketchnote iPad app and start writing or drawing, you’ll see your work get copied in real time on the iPad. When you’re done, you can replay the recording and share it online right from the app.

The final version of the iSketchnote app will also let you change the colors of the ink, support multiple layers and more. The company behind iSketchnote also hopes they can make their device compatible with popular writing apps like Paper and Evernote. But the iSketchnote can actually work even without the iPad, but you’ll need to supply an SD card so it can store data.

Pledge at least $149 (USD) on Kickstarter to get an iSketchnote as a reward. But before you pledge note that the first batch will only be compatible with the iPad 3 and later. The company behind iSketchnote did say that their technology already works with Windows, Mac OS X, Linux and Android, but they’re focusing on the iPad for now.