You can convey a lot of things through touch. You can give a sympathetic hug, a joyous high-five or an angry punch. But Disney Research Pittsburgh came up with an interactive installation that can transmit sound using the human body. The sound will then be heard when a carrier touches someone’s ears. This means you can transmit a verbal message through touch. 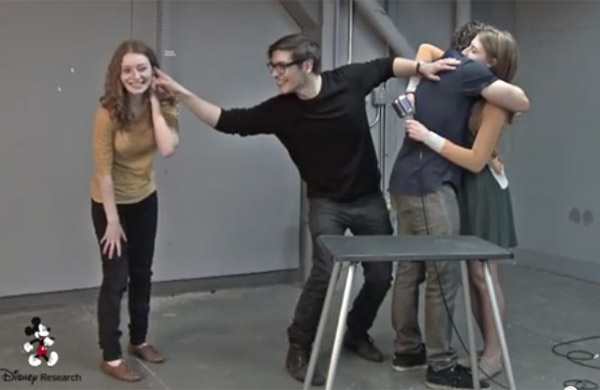 The researchers call their invention Ishin-denshin, after a Japanese idiom that describes “unspoken mutual understanding.” Ishin-denshin consists of a microphone connected to a computer’s sound card. There’s also a thin piece of wire connected to the microphone’s cable and wrapped around its metallic casing. The microphone is set to start recording when it receives sound with an amplitude above a preset threshold, presumably so it won’t record ambient noise.  The recorded loop is sent to the computer, which converts the sound into a high voltage but low current electric signal and sends it to the thin piece of wire. The signal is then transferred to the person holding the mic, who can then pass it on to someone else via touch. The signal can be passed to multiple people before it’s directed to someone’s ear.

I wonder if it’s possible to make a visual version of the Ishin-denshin.