Nowadays, we often hear about unmanned aerial vehicles aka UAVs or drones in the news as next generation weapons of war. The researchers at MIT’s SENSEable City Lab want to dispel that notion and show people that this new technology can be used in more positive ways. For example, as tour guides. 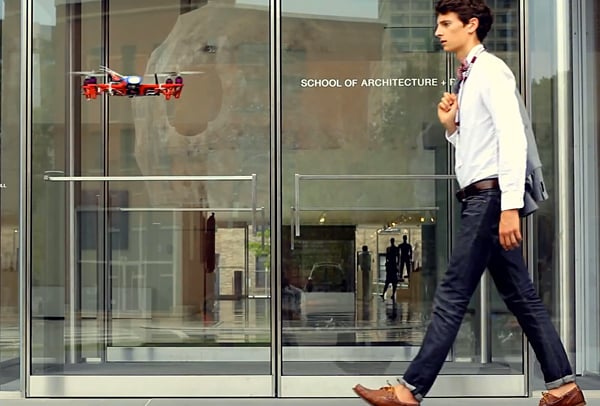 The SkyCall project uses a Wi-Fi network, a mobile app and quadcopters equipped with GPS, a camera and other onboard sensors to create smart tour guides. A prototype of SkyCall is already being tested at the labyrinthine grounds of MIT. To summon a drone, the user uses the call feature on the SkyCall app. When your friendly guide arrives, the user enters the alphanumeric code for his destination (I don’t know how he gets the code in the first place though). The guide will then start moving at a leisurely pace.

The drone will even talk about landmarks along the way and can be stopped by the user through the app. The drone also uses GPS to detect if the user has fallen behind a certain distance and will wait and then alert him through the app.

The SkyCall: why ask people for directions when you can build a sophisticated network of satellites and robots to guide you through life? As someone who is socially inept, I’m only being half sarcastic. I’d love to have a drone buddy to guide me around and perhaps even protect me.