The Altered States of America: A Map of American Sci-Fi History

American history is among the richest in the world. I’m not just talking about what went down in the real world, but also everything that transpired in the realm of science fiction, horror, and fantasy.

In an attempt to map the most notable of these fictional events, Chop Shop has launched a Kickstarter project called the “Altered States of America.” 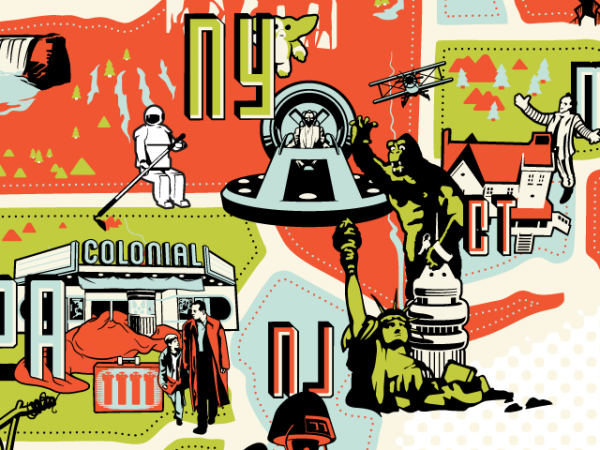 It’s essentially a print project, where backers can make pledges to receive buttons and posters featuring the parts of the map or the completed map itself.

Putting the map together will require a lot of work. In fact, the Chop Shop team is already on it, but they’re inviting anyone who wants to contribute to send in their suggestions of which events to include on various parts of the map – especially those states with a shortage of otherworldly occurrences.

A minimum pledge of $5(USD) will get you two one-inch buttons featuring the state (and its corresponding artwork) of your choice.  Contributions between $30 to $40 will score you an individual state print, while $70 will get you the full 36″ x 24″ silkscreened print.

The project wraps funding on September 23, so you’ll want to head over to Kickstarter now if you want to get in on the action.