We’ve seen a guitar used to send emails. Here’s a piano modded into a BFC for the grand daddy of modern first person shooters. Aptly named the Doom Piano, its keys are grouped into different commands, so you don’t really need to know how to play the piano to play Doom with it. Not that anyone would play the game with this thing. 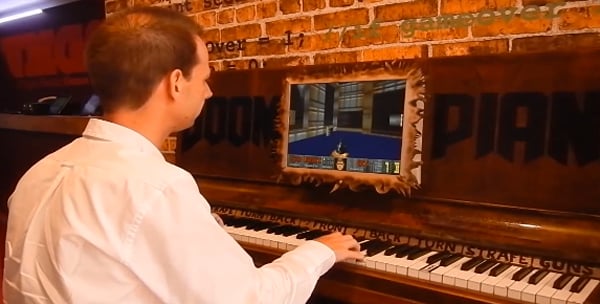 According to CNET Asia, the Doom Piano was built by a group of indie game developers for the London Hackspace, a community-run workshop for makers and tinkerers. The devs covered the piano’s hammers with copper tape, soldered the strings to a ground and then wired three I-PACs to emulate keyboard input. From there – not that I understand what “there” is – I guess it was just a matter of mapping the keys to the controls for Doom.

Ahhh, music only a space marine could love. Also, YouTuber v21 pointed out that the man playing the Doom Piano in the video is also an FPS legend. He’s Martin Hollis, the director of GoldenEye 007.