New videogame systems all have one weakness: there are barely any games that come out at the same time as the hardware. The PS Vita and the Wii U are the most recent victims of this dilemma. Even though the Oculus Rift is a head-mounted display and not a console, it’s so different from other monitors that it’s going to have the same problem. But not if VorpX can help it. 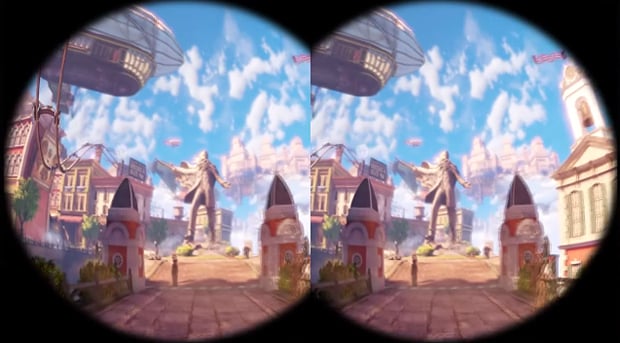 The VorpX stereoscopic 3D driver converts Windows games that make use of DirectX 9, 10 and 11 so that they’ll be compatible with the Oculus Rift. It currently works with 90 games, including Bioshock Infinite, Fallout 3 and Mirror’s Edge, all of which you’ll see in the demo below. You can read the full list of compatible games here.

Aside from converting games, the driver also has a number of features to make it easier to play today’s games with the next-generation display. Users can make a virtual keyboard pop up on the screen, which I assume they can then operate with a mouse, negating the need to see the keyboard that they’re using. Users can customize the virtual keyboard as they see fit. VorpX also has a feature called Edge Peek. Activated by pressing the mouse scroll wheel, Edge Peek lets you look at the edge of the screen.

Edge Peek may not be needed in future Oculus Rift-ready games, but it might be a requirement for games from the current generation or earlier. That’s because the headset crops what you’d normally see on a traditional display, which means anything that’s on the far edges of the screen won’t be visible. But many games place critical information like radar or items on the edges of the screen, hence the need for Edge Peek. It’s not an optimal solution, but it’s better than nothing. Another feature related to Edge Peek is the option to zoom out the view, which should come in handy for viewing cinematics.

VorpX also supports two 3D modes, one of which results in better graphics but is more resource-intensive than the other option.

The driver is currently in beta, but VorpX is already charging for it. If you want to take the plunge, head to Road to VR to order the software; $40 (USD) gets you two licenses. Check out Road to VR’s article to find out more about the driver.