We’ve featured a variety of rapid fire rubber band guns before, but they were either custom made or crazy expensive. XYZbot is here for us poor, lazy and non-mechanically-inclined folks. They launched a Kickstarter fundraiser for a fully automatic and electric rubber band machine gun that’s cheap and easy to assemble. 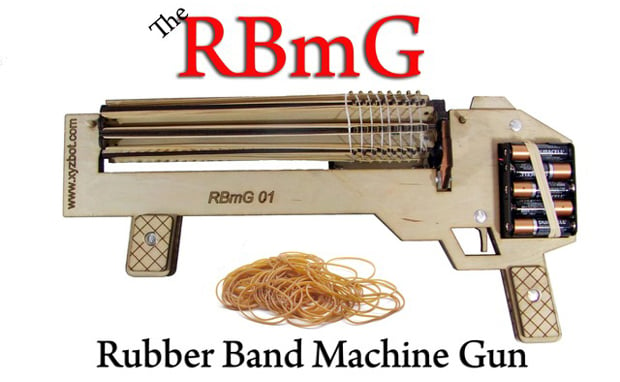 The gun is made of laser cut wood. All you need is a pair of pliers, a screwdriver and 30 minutes of your time to assemble the gun. Judging from the image and the video, you’ll need five AA batteries as well, which is a bummer. I suppose you can use rechargeable batteries to cut down on costs and waste. The gun only has one mode, rapid fire, which spews rubber bands at about 800 rounds per minute. You can only load 64 rubber bands at a time though. XYZbot said you can try loading two rubber bands per slot for a total of 128, but you’ll have to be more careful – and more patient – when loading.

Now comes the best part: a pledge of at least $49 (USD) on Kickstarter will be enough to get you a kit. You can also pledge at least $59 to get the gun in time for Christmas.