Some older gamers complain that we’re spoiled today because of the wealth of guides, cheats and tips available online. If you’re one of those gamers, you’ll hate Machinima’s Xbox One app. The rest of you, feel free to rejoice. The app will let you view videos related to the game you’re currently playing. Because of the console’s multitasking feature, you’ll be able to watch videos and play your game at the same time. 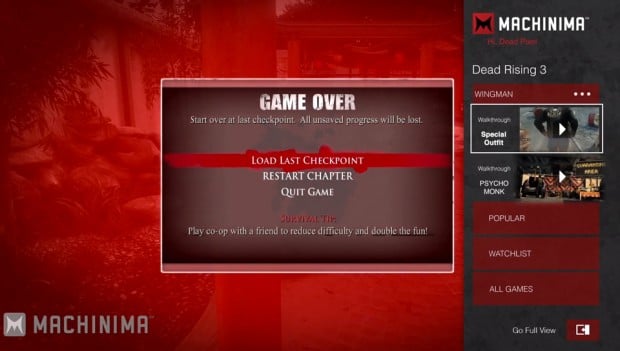 While playing a game, you can start the Machinima app by saying “Xbox, snap Machinima.” Once it opens, the app will then load Machinima videos that are related to the game you’re playing. You can then watch videos from the side of your screen, while your game takes up most of your display. If you have a mobile device, you’ll also have the option of using the app from inside Xbox SmartGlass.

I don’t know if the app can recognize what part of the game you’re playing or if you’ll have to search for a relevant video yourself. That said, Machinima is working on what it calls Wingman, a series of official help videos for certain Xbox One games that will have detailed and exclusive content. You can expect that feature to come with a price tag.

The Machinima app will be available on November 22, i.e. the same day the Xbox One is released. I wish Shin Megami Tensei IV had this feature built-in. Damn you Tokyo and your stupid overworld map!