The guys at Wicked Lasers recently sent me a couple of their top-of-the-line lasers to test out, including the recently announced programmable EVO laser and the insanely powerful Arctic Spyder III. 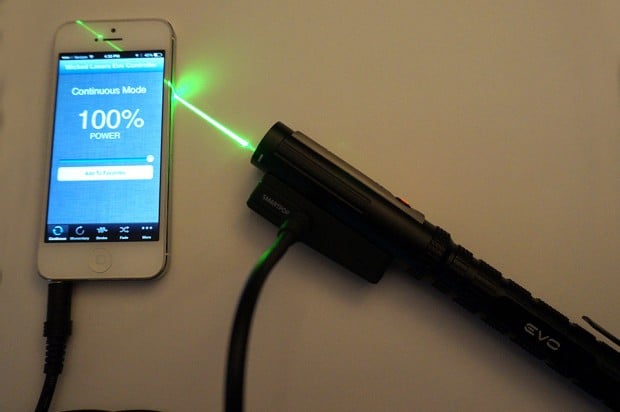 I’ll start out with the newfangled EVO laser, which has the unique capability of being controlled programmatically. Out of the box, the EVO works similarly to other bright green laser pointers, but screw on the Smartport and you can control the intensity of the beam electronically. The EVO I tested came with only the Smartport, which connects to devices via an 3.5mm audio cable, but there’s an optional Bluetooth module ($39.95) which lets you control the laser wirelessly as well.

Once the Smartport is connected to the laser, you can plug it into your smartphone’s audio port and run the EVO iOS or Android app. In its current state, the app lets you turn the laser on and off, adjust its intensity, make it strobe or pulse, and also comes with a couple of extra fun things like a morse code and microphone activated mode (which for some reason I couldn’t get to work on my iPhone.) One other note: I was unable to get the laser to activate as a standalone device while the Smartport was attached.

Despite only needing two AA batteries, the EVO I tested has a continuously variable output which kicks in around 20mW, and has a maximum output of 100mw. This is plenty bright for optical experimentation, but it’s not quite powerful enough to burn things. The EVO review unit came with the optional lens kit, which lets you create a variety of patterns with the beam as well. The add-on lenses definitely aren’t needed for science experiments, but they’re fun and could prove useful for photography, Halloween light shows and for impromptu raves. 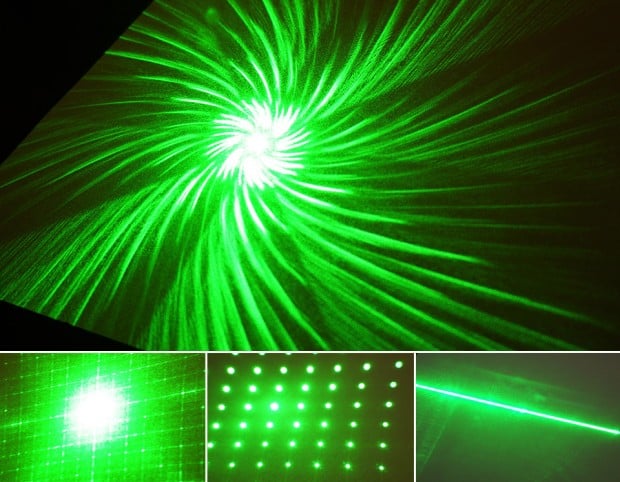 The EVO’s programmability is definitely its most compelling feature, and I could see the potential to gang multiple EVOs together for use in multimedia and interactive art exhibits, as well as long-exposure photography. 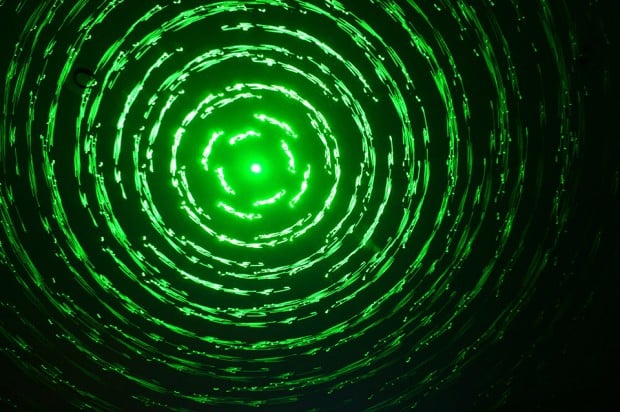 I think it could be neat to do something with motion or gesture inputs to control EVOs. For those who want to go beyond the EVO smartphone app, Wicked Lasers offers documentation for building your own iOS, Android or OS X applications, as well as an optional firmware programming kit which lets you delve into the internals of the laser itself.

Now, on to the Arctic Spyder III. What can I say about this laser other than the fact that it’s the most powerful handheld laser I’ve ever had the opportunity to use. The model I had in hand is the beastly 2000mW (2 Watt) version, and it’s insanely bright. Now this isn’t some little laser pointer you carry around on your keychain. Measuring in at 10 inches-long and weighing about a pound, it’s more like a lightsaber – not that that’s a bad thing. It’s powered by a rechargeable Lithium-Ion battery, which lets you use the laser for between 30 and 180 minutes depending on the laser’s power setting.

The Spyder III blasts out a bright blue beam that’s capable of easily dispatching dark colored objects (paper, plastic, balloons) in seconds. In the brightest model, it’s also bright enough to be seen from an astounding 34 miles away – though I didn’t really get to test that measurement. 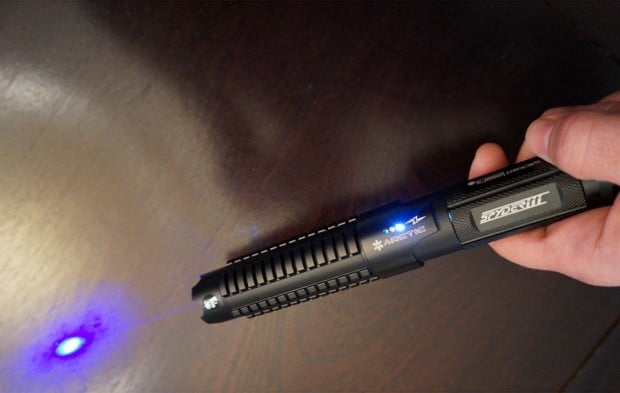 If you opt for the 1 Watt model, the maximum beam distance at .25 lux is just under 29 miles, and the 1.4 Watt model can hit 24 miles. So with good reason, you never should point these things anywhere near airplanes. It also goes without saying that you MUST wear the included eye protection when using this laser. It’s dangerously intense. 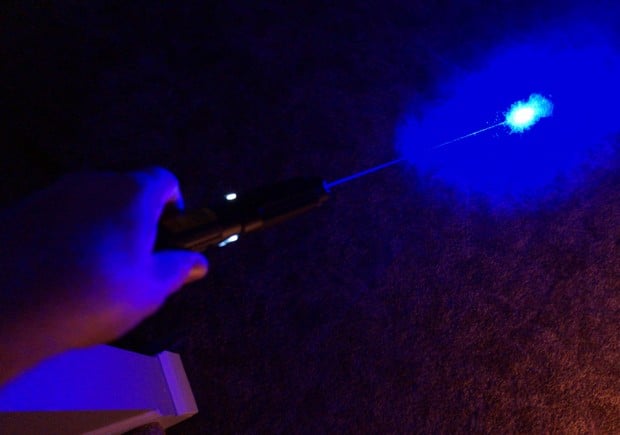 In my unscientific tests, the Spyder III was able to completely illuminate a darkened room – in the low power mode. In full power mode, it’s brighter than I can describe in words – especially at its tip. 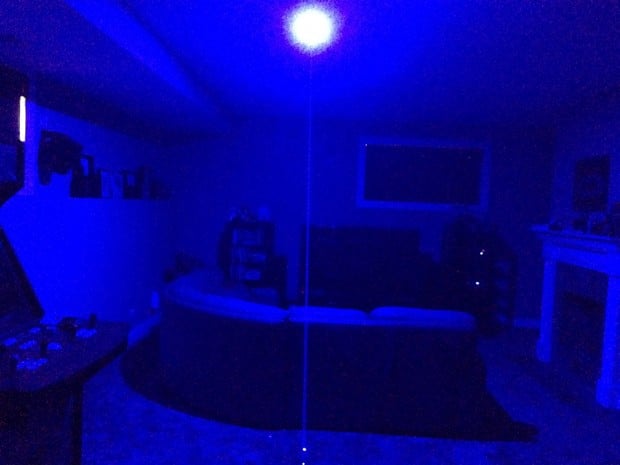 Its beam is completely visible without fog, doing a good job illuminating dust particles in the air all on its own. It’s also great for shooting long-exposure photos. Here’s a pic I snapped using the Arctic to light up my pinball machine. 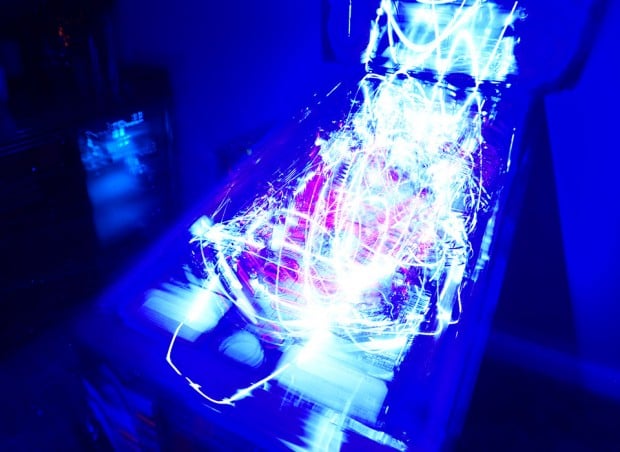 And if you’re interested in lighting stuff on fire, this thing will definitely do the trick. Dark paper, balloons, matches, wood and even cigarettes are no trouble for the Spyder III. It’s a bit of a challenge to ignite white paper since it’s so reflective and there’s a bit of beam divergence, but with patience – and a steady hand or tripod, it will eventually burn through.

In conclusion, if you’re in the market for a serious handheld laser, Wicked Lasers has definitely got you covered. The EVO is a really compelling idea, with the ability to to program and control its beam with your smartphone or other application, while the Arctic Spyder III is just downright impressive for its sheer power and brightness. In addition, both lasers are fully legal to own, and include a safety switch which makes them much less likely to cause harm if the fall into the wrong hands.