Scale FPS Lets You Change Sizes of Objects: Honey, I Shrunk or Blew up the Things!

First-person shooters have come a long way from simple shooting and jumping. And shooting. While conventional shooters are still popular, in recent years we’ve seen first-person shooter games with different kinds of shooting. There are games that let you shoot portals, a game that lets you shoot pictures and even a game that lets you shoot clones of yourself. Now we have Scale, a game where you shoot rays that enlarge or shrink objects. 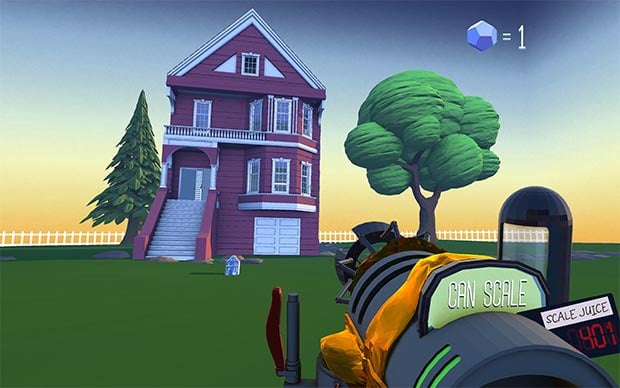 Scale is a game for Windows, OS X and Linux. It’s currently being made by indie developer CubeHeart. The game puts you in an open world and has you manipulating the sizes of objects to solve puzzles and progress. As you’ll see in the video below you can even shrink an entire level. The basic constraint is that you have to “suck the size” out of one object before you can enlarge another.

Perhaps the only thing about Scale that’s crazier than its mechanic is its story. You play a “young physics savant” named Penny Prince, who invented the size-changing gun. Unfortunately she accidentally destroyed the East Coast, leading to the demise of 9,322,591 people (yep, CubeHeart specified that). Also someone took her cat. But with your help Penny may be able to redeem herself and find her cat.

Help CubeHeart enlarge its funding by pledging for Scale on Kickstarter. A pledge of at least $10 (USD) gets you a DRM-free copy of the game as a reward.