Air Rope Inflatable Tunnel: An Alternative Way to Get out of Sticky Situations

There are a lot of emergency situations that call for the use of rope. Unfortunately, rope pulley systems aren’t the safest way to go sometimes due to external conditions. Like, say, when there are floods or overflowing rivers and people are trapped on one end. No doubt you’ve seen similar scenarios in movies where the hero clings to the rope and pulls himself to safety on the other side. But regular folks might lose their grip and be swept away by the current.

As an alternative to this, the Air Rope came to be. 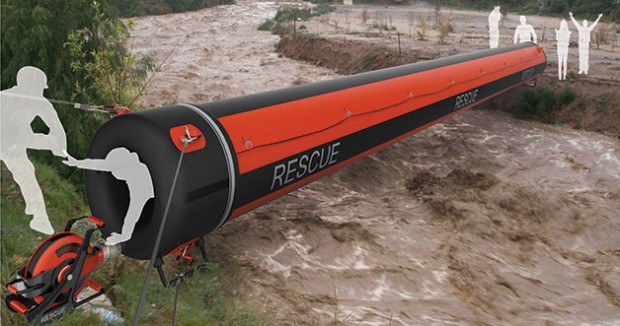 It’s essentially an inflatable tunnel that functions as a rope in the sense that it will help you get across certain obstacles without relying so much on your arms. Emergency response people could set up and inflate the tunnel within minutes and have people cross the river by crawling through it instead of using the rope system.

Air Rope is a rescue system that takes the form of an inflated tunnel. It can be used as a thoroughfare across a river when secured to the ground and a tree at each end. A motor and propeller create a powerful flow of air. The air nozzle has a screw-in profile to prevent air leakage. Aluminium alloy, which is light and strong, is used for the metal components.