An interesting flying robot has been created called Gimball that is specifically designed to be able to crash and recover quickly. The creators of the robot designed it to be used in situations that might be hazardous for humans. The flying device has a spherical roll cage mounted on pivots that allows the helicopter to stay upright, as well as to handle cramped spaces where other drones would likely crash. 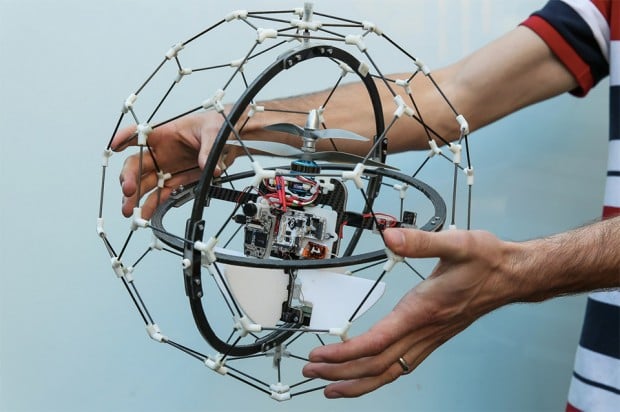 The flying drone was designed and built by a team in Switzerland from the Ecole Polytechnique Federerale de Lausanne (EPFL). In-flight it resembles a mosquito crashing into things and moving on without missing a beat. Co-creator of the flying robot, Adrien Briod, told the BBC that Gimball was partly inspired by the way insects fly.

The little drone has a gyroscopic system including an accelerometer of the type used in smartphones to allow it to know which way is up and stay in the correct orientation. The drone is 13-inches in diameter and weighs 13 ounces with the capability of lifting 30 g. Currently the robot is remote controlled, but the company hopes to integrate features allowing it to fly autonomously.

The robot is intended to be able to be deployed in disaster situations such as entering buildings that are burning or hazardous materials are leaking.

[via GigaOM and BBC]