One of last year’s most successful Kickstarter-funded projects was the MaKey MaKey, a device that allowed you to input keyboard commands to a computer using everyday objects. A new USB device called the Verve is similar to the MaKey MaKey, but it’s more versatile. Using a variety of sensors, the Verve lets you trigger mouse and keyboard input using real-world actions or events. 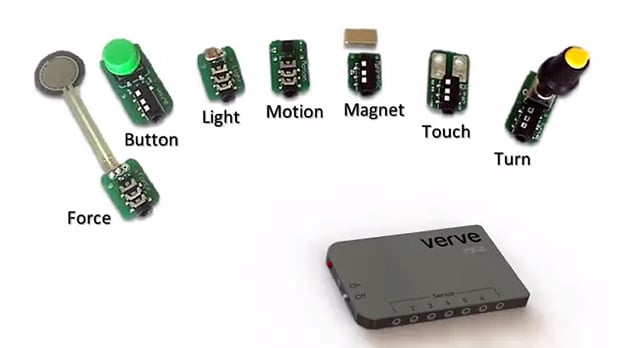 The Verve consists of a central console and seven types of sensors that plug into the console. It also has a companion program that has both Windows and OS X versions. The program is used to map the input from a sensor to a mouse or keyboard key, as well as to set the threshold – i.e. the intensity of the input – to which the mapped key will be triggered. For instance, you can use attach the motion sensor to a sword and make your videogame character attack when you swing the sword. Or you can leave the motion sensor by your cubicle and make your computer show your desktop when someone passes by. Because you’re not hiding anything there.

Pledge at least $99 (USD) on Kickstarter to get a Verve kit as a reward. The kit will come with one of each sensor along with all the cables you need. I’m a bit conflicted with the potential of the Verve. On one hand, the variety of sensors means it encourages a creative and diverse array of input options. On the other hand, the one-to-one correspondence of a sensor to a key makes it quite cumbersome to setup anything beyond a simple command.

The MaKey MaKey is so easy to use because it gave you several inputs just by plugging in one board. The Verve gives you seven sensors, but each sensor can only be mapped to one key. What modern software uses just one key? Edit: As InxUs Interactive’s Nizan said in the comments, customers will be able to specify the type of sensors they want to be bundled with their order when the Verve is released commercially. In addition, you’ll also be able to map up to 10 commands to one sensor, a very thoughtful feature. It’s amazing how cheap and user-friendly sensors have become, but I’m not sure if the Verve will be a legitimately useful product or a mere curio.