Dad Makes His Son a 3D Printed Prosthetic Hand for $10

Prosthetic hands are expensive. I mean in the range of tens of thousands of dollars. Otherwise everyone would have one – at least those who need them. Well, that was true before 3D printing came along anyway. Now we can make all kinds of things at a fraction of the cost. Like prosthetic hands. 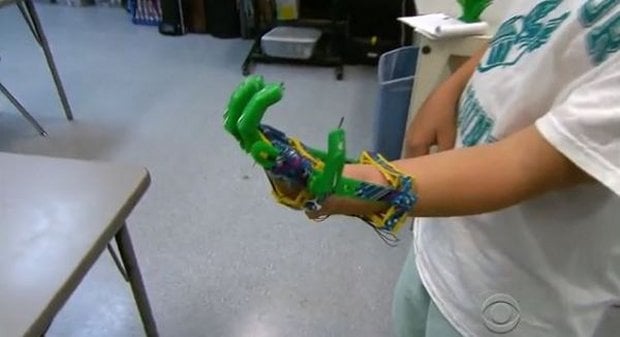 It looks like 12-year old Leon McCarthy of Marblehead, Massachusetts was born at just the right time to take advantage of this technology. He was born without fingers on his left hand and didn’t have a functional prosthetic replacement until his father, Paul McCarthy, found some online instructions for a design that could be built with a 3D printer.

Fortunately Leon’s school had a $2,500 3D printer. Using less than $10 worth of materials, his dad built Leon a useful mechanical hand. When he moves his wrist forward, the fingers clench. When he moves it back, the fingers open. While it’s not the most aesthetically pleasing thing, it is functional, and will definitely improve Leon’s quality of life. We have not even begun to explore the possibilities of 3D printing.