One of the strangest mythological weapons out there in my opinion has always been hammer wielded by Thor. Mjölnir is an interesting weapon in that reminds me a bit of the Excalibur where only one person can ever wield the hammer. Even the Hulk is unable to pick it up. 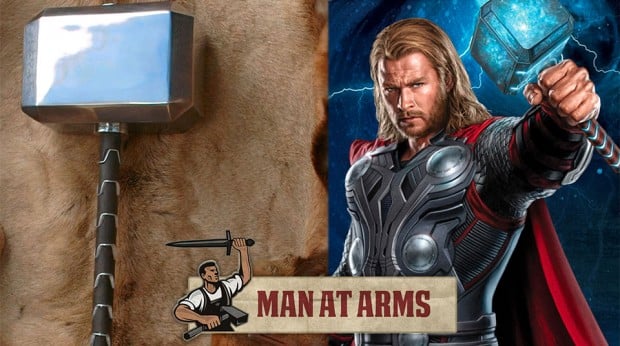 Blacksmith and armorer Tony Swatton operates a company called Sword and the Stone that makes weapons using methods similar to what they used in the old days. His hit YouTube series Man at Arms has featured a number of awesome weapon builds, and his latest is a replica of  Thor’s hammer similar to the one used in the upcoming film Thor: The Dark World.

The hammer was made out of sheets of chromoly steel and while it’s hollow, still weighs about 20 pounds. The entire process looks like it took a long time to complete and the finished hammer is impressive indeed. The only downside is that the hammer appears to be significantly larger than the one from the film.

Swatton says he plans on putting the hammer on display in his shop – but not before filling the hollow chamber with shot, to bring the weight up to about 200 pounds, so it’ll be impossible for mere mortals to pick it up.