A new company called VRcade aims to revive the idea of a gaming arcade with the help of virtual reality. Whereas VR headsets like the Oculus Rift need to be wired to a computer to work, VRcade’s headset has a wireless transmitter. Why? Because VRcade isn’t just a headset, it’s an entire room. Or even an entire floor. When you move in the real world, you move in VRcade’s virtual world. 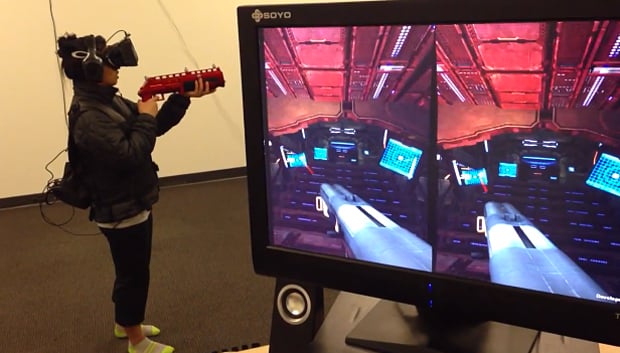 Aside from its wireless headset, VRcade uses motion capture cameras and a modular motion capture suit. In addition to the suit, there are also markers on the headset and whatever prop you have – like the gun in the image above – that the cameras can use to track your movement. In other words, while other VR headsets can track only your head, VRcade tracks you.

VRcade has several advantages over what VRcade CEO and co-founder Jamie Kelly calls “virtual sit down gaming.” VRcade’s games will encourage player movement: walk, run, sneak or jump in the real world and you do the exact same thing in the virtual world. As far as controls go, it doesn’t get more intuitive than that. For instance, VRcade claims that the tester in the video below has no experience with first person shooters, but she still figures out how to navigate in the virtual world:

The correspondence between movement and virtual output also reduces the risk of motion sickness, unlike when you’re experiencing VR while confined to one spot. Finally, and perhaps most importantly, is that extra layer of immersion that users will get from being able to physically feel their movement. Here’s Kelly explaining the basics of VRcade:

VRcade seems really promising: the second coming of the arcade shop, but more inclusive and possibly even healthier. In addition, VRcade can also adapt their system for non-gaming purposes, such as giving virtual tours of structures that have yet to be built.

But of course nothing is perfect. As Ars Technica notes, VRcade has a chicken-or-egg situation when it comes to attracting game developers. Obviously the company needs developers to make games for its system, but because a VRcade game has to be tailored to a particular space, they need to already have that space rented or bought. But how will they know the dimensions of the space a game needs if the game doesn’t exist yet? Hopefully VRcade can figure that out.