Check out this pedestrian bridge that China wants to build over the Dragon King Harbor River in Changsha, China. It’s all wavy and crazy and I don’t know about you, but this lazy American is getting winded just looking at it. 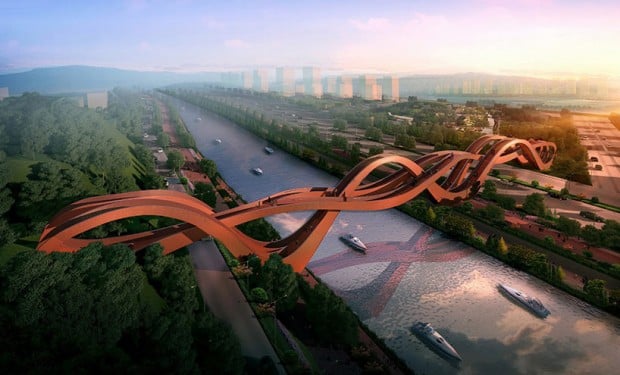 This bridge was designed by Amsterdam based NEXT Architects and construction is scheduled to begin next year. I’m kind of saddened though. This was the perfect opportunity for them to build a dragon bridge. I mean, they already have the wavy body. They just need a giant dragon’s head at both ends. But nope. No dragon. Vietnam has one, why not China?

The design of the nearly 500-foot-long bridge is supposed to resemble traditional Chinese knots and/or a Möbius strip. Booo! I just want a dragon. Failing that, a roller coaster ride to the other side would have been cool too. Seriously though, it’s pretty cool.

[via designboom via Laughing Squid]