I’ve always wondered exactly how modern concept cars are actually designed. In years past, artists went to work with clay and molded the shape of a car by hand. I assumed that most of this process was now done with computers. Apparently, a mix of the two is more accurate for modern concept cars like the Cadillac Elmiraj. 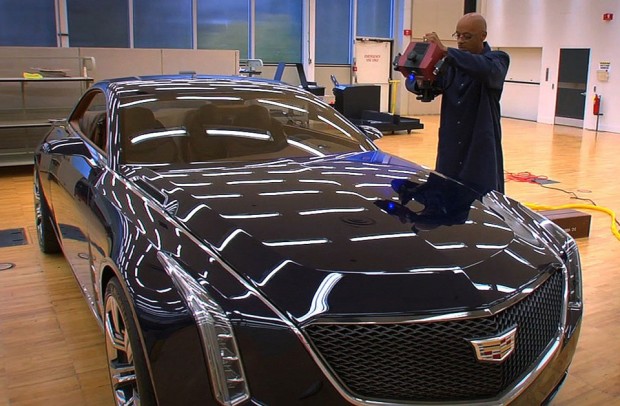 GM has announced that 3D scanning was a big part of the design process for the car. GM used a 3D scanning process that projected light patterns and used an advanced camera to capture 3D shapes and turn those shapes into mathematical data. That mathematical data was then used to create a 3D rendering.

Once those math-based models were achieved, the hand modeling in clay and computer milling took over. Changes made to the mathematical model for the concept were applied to the clay model using computer controlled milling. This process allows GM to move from a scale model to a full size model in about a week.

“With the Elmiraj, we were able to use 3-D scanning as the bridge between traditional hand-sculpting teams who work in clay and digital modeling design teams who work in math,” said Frank Saucedo, director of General Motors’ North Hollywood Advanced Design Studio. “Our ability to scan the clay model with speed and precision and go from the digital tools to the hands of a craftsman and vice versa was extremely valuable.”