When the Omni VR treadmill was announced, many anointed it as the perfect companion to the much-awaited Oculus Rift. But a group of students at the Vienna University of Technology may have a better VR treadmill at their hands (and feet). They call it the Cyberith Virtualizer. 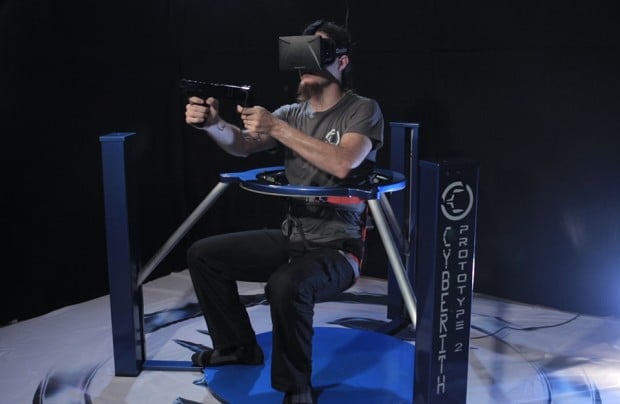 Much like the Omni VR, the Virtualizer is an omnidirectional motion sensor. It allows the user to walk or run in any direction, as well as jump, crouch and strafe. However, unlike the Omni VR, the Virtualizer also lets the user play while sitting. Another big difference is that its walking surface is flat, makes no sound and only requires that the user wear socks. The Omni VR on the other hand requires users to wear a custom pair of low friction shoes and it makes a considerable amount of noise when used. The video below shows Cyberith founder Tuncay Cakmak play a modified version of Grand Theft Auto IV using the Virtualizer, a Wiimote and of course an Oculus Rift headset.

I’d still rather have wearable motion sensors if I’m ever going to play a VR game, but I think the Virtualizer has great potential. Hopefully someday all of its electronics can be embedded in a less conspicuous form.