Sherlock Premier Tipped by Flowers in a Hearse 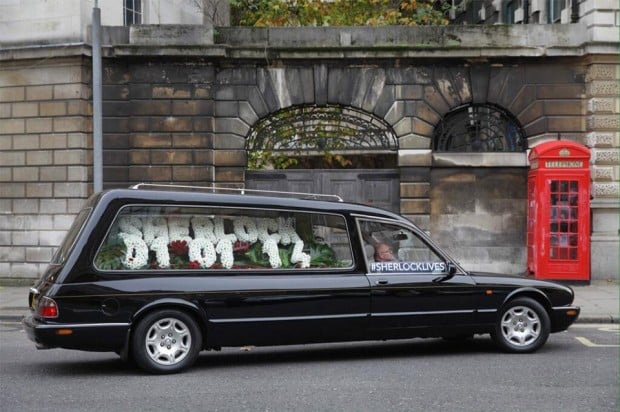 A hearse was hired to drive around with a flower arrangement in its glass windows. Those flowers spelled out “SHERLOCK” and the date “01-01-14.” Of course, the new season will air on January 1 (at least in the UK). It’s also telling that the season premiere is titled “An Empty Hearse.”

The hearse also had a hashtag on one window that read #sherlocklives. Actor mark Gatiss also tweeted to fans that they should look out for the vehicle. Gattis wrote, “Should you be around Baker St, Gower St or even Bart’s tomorrow morning, look out for a certain vehicle containing special news…#Sherlock.”

Fans looking forward to the next Sherlock episode here in the US will have to wait until January 19th, 2013 for its premiere on PBS.