There is nothing cool about war in the real world, but I am a fan of movies and stories about what went on during WWII. I’ve seen more than a few movies that show submarines used in WWII. Honestly, I thought the Germans and their U-boats were the only subs. It turns out that the Japanese had a number of submarines too. 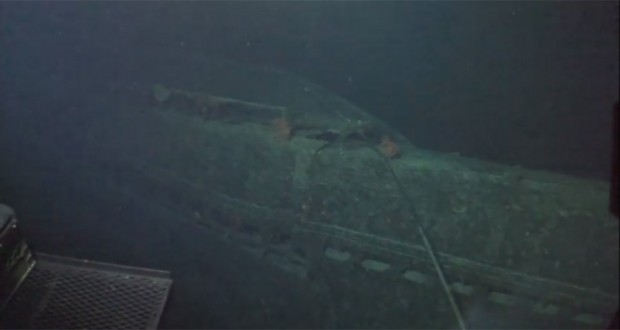 Close to the end of WWII, the Allies captured five submarines and brought them back to Pearl Harbor for inspection. One of the captured subs was a massive beast called the I-400. It was a Sen-Toku class sub rivaled is size only by modern nuclear submarines. The I-400 was 400 feet long and carried enough fuel to transverse the world 1.5 times before refueling.

After the war was over, Russia wanted access to the subs. With the cold war heating up, the US didn’t want to give Russia access to the tech inside the Japanese submarines and they scuttled the I-400 in 1946 – promptly forgetting where it was sunk. A group of researchers from the Hawaii Undersea Research Laboratory (HURL) has been searching for the sunken subs for years and finally found the I-400 in off the coast of Hawaii. The discovery was made in shallower water than expected last August, but was just announced this week. Check out the video footage below to see their first sighting of the sub:

“The I-400 has been on our ‘to-find’ list for some time,” said veteran undersea explorer Terry Kerby, who led the expedition that found the submarine. “It was the first of its kind of only three built, so it is a unique and very historic submarine.”