When my son was really small he loved trains and watched Thomas the Tank Engine a lot. He loved the oddly animated train and his pals. I always found Thomas more than a bit creepy. If you ever thought that Thomas might be plotting to kill and take over the world, then I have the Skyrim mod for you. 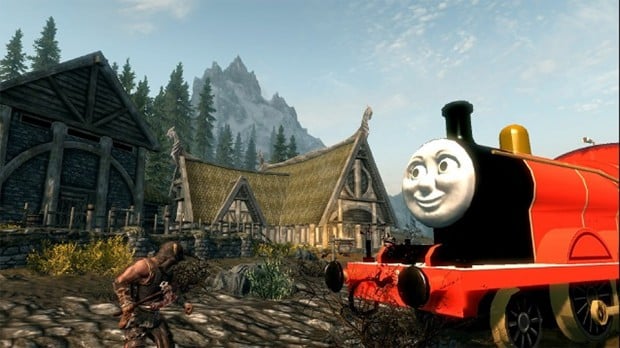 It’s called the Really Useful Dragons mod and it turns every dragon on the game into Thomas the Tank Engine. The roars of the dragons are even replaced with Thomas’ shrill whistle. That toot-toot will haunt your dreams. Here, check it out:

I love the first time you see Thomas in the video. He swoops in and lands atop the tower with dust puffing out. I think he was meant to burn cities and capture souls, what about you? You can fast forward to about 2:00 in the video to bypass the wait and see Thomas the Terror for yourself.

Want to try it for yourself? Grab the mod here.