As shown by the Kinect, today’s cameras are powerful and cheap enough to provide accurate motion tracking. The same feat can be achieved by making the subject carry a motion sensor or a tracking device of some sort. But a group at MIT CSAIL led by Dina Katabi have come up with a way to track motion and body parts in 3D using only radio signals. 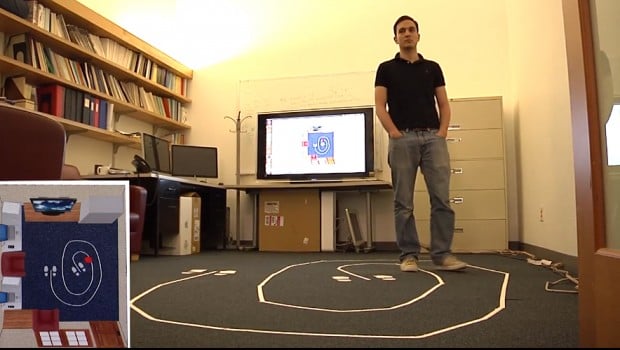 Katabi et al call their technology WiTrack. The current prototype uses four antennas, one to transmit the signals and three to receive the signals that bounce back from subjects. The radio signals that WiTrack uses are apparently a hundred times weaker than Wi-Fi signals. Because it doesn’t require a camera to work, WiTrack can work through walls, assuming the wall lets the signal pass through. For instance, it can be used to interact with devices even if you’re not in the same room as them. Also, because the subject doesn’t need to carry any tracking device, it might be more suited to full motion gaming compared to the likes of the Wii, the PS Move and even newer tech like the PrioVR.

While WiTrack seems really practical, after watching that video I think we all quickly realized that it can be used to discreetly violate our privacy as well. Forget about tinfoil hats, we might need to make lead-lined houses.

[via MIT via Engadget]