There are already plug-and-play third-party devices that let you play previous gen consoles or a PC using any of their controllers. For instance, you can use a Wiimote with your PS3 if you want. There’s no equivalent product for the PlayStation 4 just yet, but Marcos Mori de Siqueira of Softfactory is onto something here. He hacked a Dualshock 4 controller to send input from a mouse and keyboard to the PS 4. 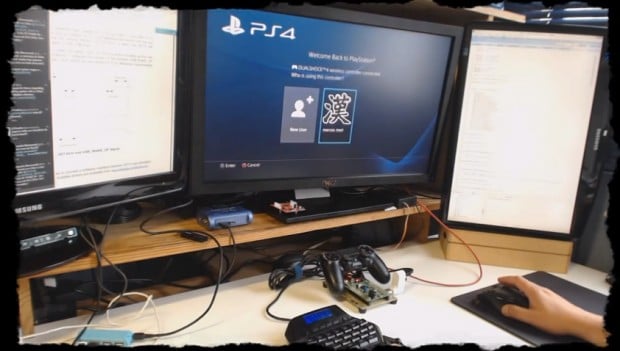 I’m not even going to pretend that I fully understood what Marcos pulled off, but from what I grokked he used a microcontroller (plus two digital-to-analog converters for emulating the thumbsticks) to turn signals from his keyboard – in this case a Logitech Gameboard – and mouse into signals that the PS4 understands, sent via the Dualshock 4’s circuit board. All in all it took him about $50 (USD) of materials and a ton of solder to make the mod. Skip to about 1:55 in the video to see the mod in action.

Check out Marcos’ post on Softfactory for more details on his mod. Seeing as FPS and MMOs are still popular, I wonder why Sony and Microsoft don’t just add support for keyboards and mice on their consoles. They can probably earn extra from certifying third party hardware if they did that. It’ll make it way easier to search for content on their online stores too.