3D printed objects are usually rigid, or at least made of parts that were printed separately. This makes it time-consuming if not outright impossible to print large objects or ones that need to be flexible or adjustable. But what if you could break down an object into smaller, foldable parts? That’s the idea behind Kinematics. 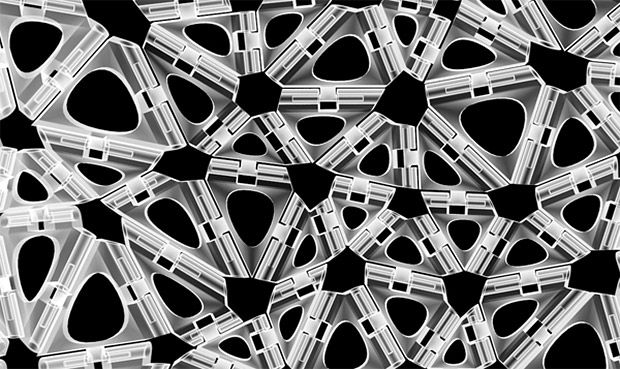 Made by Nervous System in collaboration with Motorola’s Advanced Technology and Projects group, Kinematics is a proof-of-concept 3D modeling software that lets you design a complex 3D model made of interlocking triangles. In the same way that you can make 3D graphics using two-dimensional triangles, Kinematics can theoretically make any 3D object out of interlocking triangles.

The 3D models it makes can be printed without modifying existing 3D printers. They don’t need to be assembled because their hinges are printed in place. Kinematics can also make a scrunched version of the 3D model, allowing you to print objects that are larger than your printer’s capacity. You just unfold the printed object into its final shape.

For now, the Kinematics app can only be used to make a 3D model of a bracelet. Nervous System also set up a Kinematics shop where you can design and then order a bracelet, a necklace or earrings. But as pointed out by several commenters at The Verge, imagine if the app could be improved such that it prints very tiny triangles, the way 3D graphics eventually improved from being spiky and blocky into the smooth and realistic ones we see in games and movies. It’d be like turning a 3D printer into a loom.

[Nervous System via The Verge]